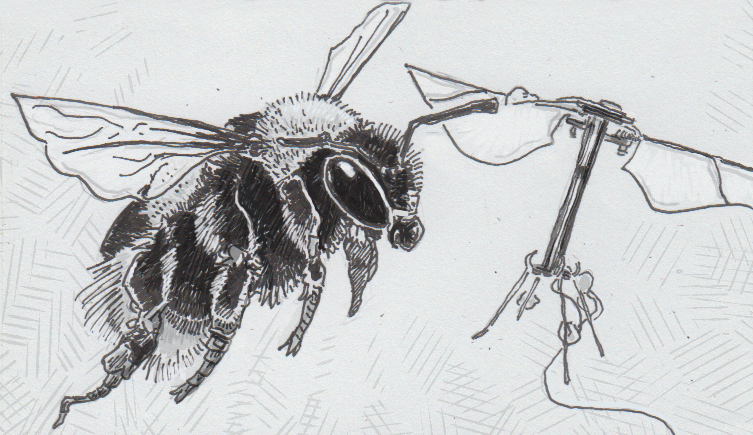 Figuring out how bumblebee wings flex and bounce without breaking

We’re still figuring out how bugs fly. Sure, it’s easy to tell there are wings involved, but those wings don’t move the same way a bird’s do, or an airplane’s doesn’t. Part of the issue has been that insects generally flap their wings really, really quickly, making tracking exactly what they’re doing to navigate through a relatively giant world very difficult. New research with high-speed cameras, and sedated bees in tubes, is fleshing out the details of how a bug stays aloft.

The first step in this research from the University of California, Davis was to simply observe how a bee moves through the world. They have to contend with a range of variables, from larger animals moving through a space to flowers swaying in the breeze, all of which make the job of collecting nectar that much more difficult. With bees weighing a mere half a gram, the same breeze that can cause a flower to tip back and forth can also buffet the bee enough to throw it off course as well. While insects like fruit flys have been found to perform complex calculations to bank and turn in order to avoid a collision, bumble bees are a bit more like heavy freighters, basically allowing themselves to clunk into other objects nearly once a second when heading out to a flowerbed.

This aeronautical…durability, shall we say, has actually been part of the bee’s identity for some time. While originally referred to as ‘humblebees‘ for their humming wings, people’s love of alliteration and eventual interest in aeronautics after World War I cemented the notion of a clumsy, bumbling flyer. However, considering that their wings are made of thin, hollow veins joined by transparent membranes, entomologists were actually a bit less sure of how the bees’ wings survived so many collisions.

Employing high-speed cameras, researchers observed that the bumblebee wings seemed to bend and flex without complaint during most of these mid-air collisions. To test the wings’ durability more directly, they sedated bees and put them into a hollow tube that allowed only their wings to extend to either side, as if in a flight position. The tube then spun, causing the wings to spin at about the same speed they move during a bee’s normal flight, during which they flap 130 times per second. For this experiment, the wings were purposely allowed to slap against a surface, with their movement recorded with another high speed camera. Aside from a fairly dizzy bee (not really,) this revealed a few specific points of flexibility in the wing structure. At certain junctions in the structural veins, the wing had extra resilin, a protein that has nearly perfect elasticity. This allowed the wing to flex and snap back without any effort or damage to the bee.

Seeing the solution to how bees survive their own flight has helped roboticists at Harvard. The Robobee project is looking to create bee-sized robots, flying on similarly engineered wings. Before these artificial bugs can help pollinate plants or aid in rescue work, designers found that they also had a problem with the delicate, lightweight structures constantly running into things and having their wings damaged. The first impulse was to upgrade the sensors and computational abilities to make the robots evade collisions like the aforementioned fruit flies, but bumblebees offer a simpler model. Robots with flexible wings can now bumble along, taking the occasional hit without worry. Hopefully they get renamed Bumblebots as soon as possible, because hey, alliteration is fun.