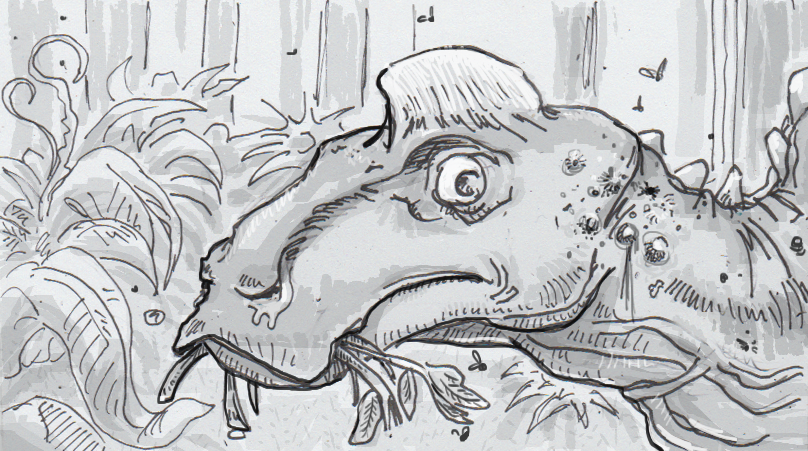 Finding the fossils and fallout of prehistoric parasites

Tyrannosaurs rex was the apex predator of its world, preying on anything it felt like, right down to other tyrannosaurs. However, there was at least one other organism that likely spelled doom for the large hunter, called Trichomonas. Rather than sporting ferocious teeth or deadly claws, this single-celled parasite caused severe lesions in the throat and mouth, eventually leading to the host’s death. Just like animals today, the inhabitants of prehistoric Earth faced irritation or worse from a multitude of tiny parasites, and we’re only just starting our search to see how they fit in ancient ecosystems.

While there’s no reason to think microbes and parasites were any less common in the Mesozoic era than they are today, their small size and soft bodies make them nearly impossible to find in the fossil record. Even with some creatures being found with fossilized soft tissue, the range of habitats for a fossilized parasite usually doesn’t include the femurs or ribs of the dinosaurs we dig up today.

One of the best locations to find a parasite is inside another creature. Some insects preserved in amber have been found with malaria-type parasites in them, which were likely spread by the insect itself similarly to a modern mosquito. Just as today, insects that inadvertently passed their prey’s blood along to new animals likely spread disease and other infections.

Some of those infections probably remained in dinosaur digestive tracts for quite some time. Evidence of ancient flukes and flatworms has been discovered in coprolites or fossilized poop. Like some modern parasites, this expulsion from a host’s digestive system was likely an intentional so that eggs or larvae could come into contact with a new host, starting the cycle over again. Even though the hosts may have been large, multi-ton behemoths, the parasites themselves were likely small, with no need to scale up to match the proportions of the dinosaur they lived in.

If it ain’t broke…

The list of parasites is growing, and is relevant beyond sparking the image of a giant theropod struggling against the itching from a Pseudopulex jurassicus bite. With each coprolite or skull marking damage from the aforementioned Trichomonas infection, scientists can get a better grasp on what was happening in an ecosystem. If a parasite can happily live by steeling nutrition out of the gut of an infected Edmontosaurus, it’s worth noting what pressures existed that could force a chance on this ancient and wildly successful lineage.

Source: The mighty dinosaurs were bugged by other critters by Tommy Leung, The Conversation