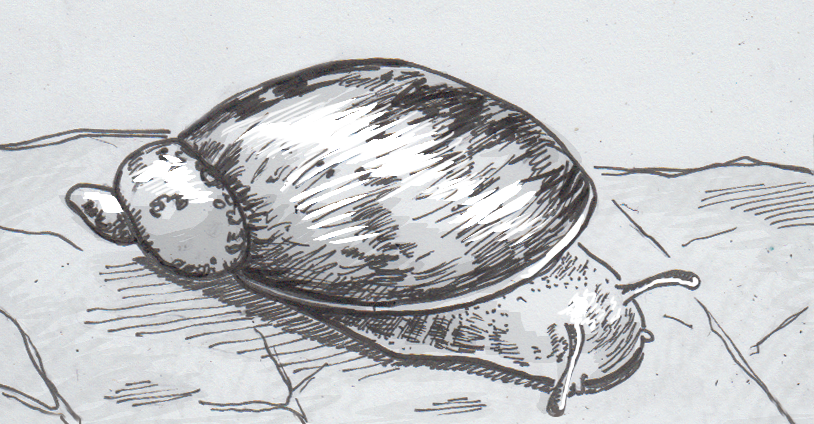 When a species is down to an estimated 340 members, every individual counts. As researchers at SUNY College of Environmental Science and Forestry struggled to feed, much less save the dwindling population of Chittenango ovate amber snails (Novisuccinea chittenangoensis), their salvation came in the form of a young snail who had inadvertently been brought into the lab. Like a hero of a movie, this little surprise was the glimmer of hope, and the clear appetite, the species needed.

The Chittenango ovate amber snail, or COAS snails likely ended up with such a precarious population because of the equally tiny slice of ecology they occupy. They’re only found in a patch of forest 1500 square feet in size, and are dependent on the terrain, humidity and light found in the shadow of a 167-foot waterfall in Cazenovia, New York. Even with those conditions artificially recreated, living in such narrow conditions meant that there were many parts of the snail’s life that had yet to be observed in the wild. Like what they like to eat.

Researchers tried to figure this out through trial and error. A batch of 10 snails would be gathered, offered a variety of foods, and then, to avoid hurting the population any further, released back into the wild when they didn’t respond to any of the food they were offered. Finally, the team caught a lucky break when an extra snail hitched a ride to the lab with some possible food options.

The tiny snail was just four millimeters in size, but it provided some huge clues about what the COAS snails like to eat. Once they had approval to tend to the extra snail, they were able to discover that it favored dead cherry leaves. It’s rapid growth on these specific pieces of flora made it clear that these leaves were the answer. Researchers realized that the waxier, tougher layers found on leaves with more sun exposure weren’t well regarded by the snails, but these leaves from the shadier parts of the forest were what they’d been looking for.

With the young hero now a whopping 21 mm, the research team has been successfully offering the shade-leaf diet to its peers and promoting further breeding. With over 600 new snails hatched in the lab, 200 animals have been released back at their native waterfall to hopefully help the species hang on to their tiny environment. This process has also helped clarify what further conservation steps are needed in the area, such as protecting native shade plants from invasive species, since the COAS snails are obviously dangerously picky eaters.