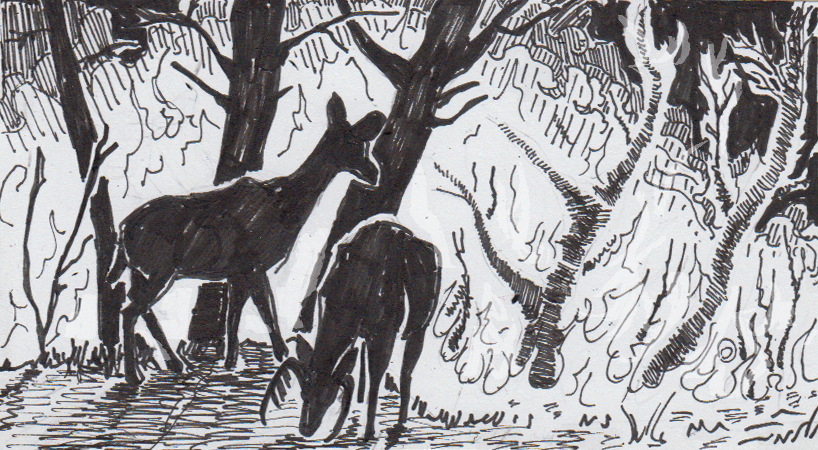 When a forest fires approach humans, our best bet is usually to heed instructions from authorities and evacuate the area if necessary. Lacking a fire marshal to refer to, animals living in the forest need to rely on their instincts, which have fortunately been developing through thousands of years of evolutionary experience.  Since fires are a regular occurrence in forests, some plants animals have adapted to not only survive them, but even benefit from them. Not every species is a winner, but enough have ways to deal with a blaze that certainly beat panicking.

Plants are a surprisingly mixed story, considering they can’t be said to have a lot of choices when a fire arrives. Many smaller and older plants will be burned and killed, but that process will actually often open up spaces and revitalize the soil for new growth. Larger trees can be surprisingly good at surviving a fire. Some pine cones rely on the flames’ heat to open them up, so that the seeds will be ready to take advantage of the newly cleared forest. Redwoods are naturally fire resistant, thanks to a lack of pitch or resin in the wood, plus bark insulating enough to be compared to asbestos.

Insects don’t fare very well during the fire itself. Most will be roasted and effectively wiped out in that area. After the fire is over though, new species of insects move in to take advantage of the disrupted ecosystem. The new species of bugs will then help kickstart the forest’s regrowth, eventually cycling back to the roster of species that were there before the fire.

To continue up the food chain, small burrowing animals can survive a fire by… burrowing. Most fires won’t be hot enough to have dangerous levels of heat penetrate too far underground, and hiding in the soil also helps things like rabbits or mice avoid smoke damage. If they can’t get underground, even a damp, rotting log may be enough of a safe haven to ride out a fire. After the fire is over is actually a rough time for these animals though, as the dense brush and bramble that normally provided cover will be gone, leaving these prey animals much more vulnerable to predators.

This is great for those predators though. By avoidance and the use of protective dens, species like coyotes or raptors can expect to return to a forest with lots of exposed food. The ample hunting will probably help them survive the transition to regrowth, as prey populations may be disrupted or at least relocated temporarily. While many birds will clear the area during the blaze itself, some, like spotted owls, will strangely wait until the last minute before leaving their roosts.

Herd animals, like deer or elk, seem to know have a confident understanding of how to avoid harm from forest fires. Deer have been seen calmly grazing close to firelines, simply staying just out of the flames’ reach without signs of fear or panic. Once the fire is over, the fresh regrowth provides a tasty buffet of ground cover, incentivizing their return to the area.

One slightly more mysterious animal is bears. While Smokey the Bear famously clung to a burning tree, many bears seem to brave the blazes directly. Bears wearing GPS tracking collars have been tracked moving right through burning areas, seemingly taking some kind of shelter in a den or hollow until the fire passed before continuing on their way.

Too big, too hot and too fast

These species’ tactics aren’t foolproof though. Since fires have historically been regular events, forests wouldn’t have too much fuel built up at one time, limiting the danger of the blaze. Factors like over-protective fire management and drought can intensify the heat and speed of a forest fire though, making them much more explosive, unpredictable and lethal. While fires always pose a risk to forest dwellers, the last decade has had many examples of fires where wildlife was not able to escape in its usual manner. While some animals could be helped, such as bears treated for burns, in some cases the only option left was euthanasia.

While we obviously can’t control every component of a fire, we can possibly choose to let the smaller fires burn more often to avoid fuel build-up, and keep the various cycles of wildlife viable. There’s debate on both sides of this issue, but when thinking about these options its good to keep in mind what kind of fires the native populations of the forests are prepared to deal with on their own.

My first grader asked: What if the fire comes during the day when owls are asleep? Do the birds fly high in the sky above the fire? Are worms safe in the dirt? Maybe the rabbits should just dig deeper? What causes fires?

Many of her questions were more or less answered above, but the top natural cause of forest fires is lightning (followed by lava!), which is probably responsible for the periodic fires that these ecosystems have come to expect. However, humans are reported to be the cause of 90% of wildfires in the United States, thanks to negligent handling of campfires, burnt debris, cigarettes and sadly, arson.

Source: Here's What Goes on Inside a Forest When a Massive Wildfire Hits by Damaris Colhoun, Atlas Obscura