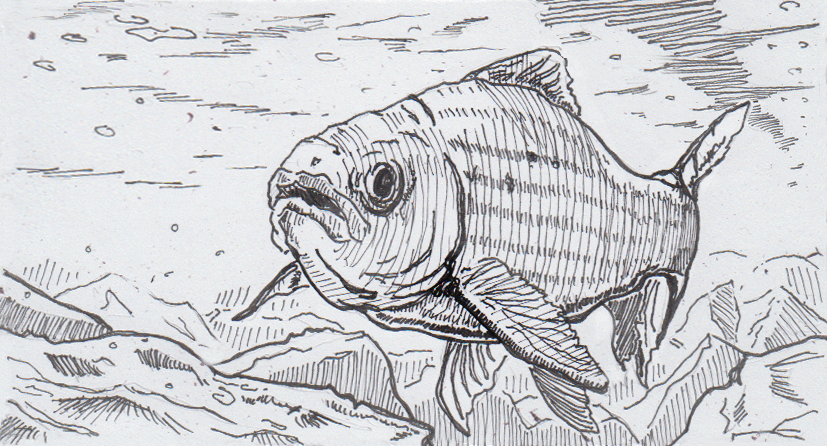 Fish feast on a variety of foods, even those that live on land

There are plenty of carnivorous fish in the seas, but don’t let that fool you into thinking they’re strict piscivores. Sharks stand out as big eaters, but fish of all sizes will sample non-seafood if it becomes available. Most often, this means trying some land-dwelling insects, but people are increasingly documenting fish gobbling up less aquatic prey, including birds and terrestrial mammals. In some cases, this might just be a matter of opportunity, and the fish are eating a body that found its way into water. In other cases, well… maybe mice and shrews should start being a bit more careful when visiting the beach.

Many species of bird visit bodies of water to get a drink or hunt for food. These forays off land often seem like one-way transactions, with the birds arriving to take the resources they want, or wait until it’s available. However, a body of evidence is building that Pacific cod have been hunting the birds as well, with many bones and feathers turning up in the fishes’ digestive tracts. Some show evidence that the crested auklet (Aethia cristatella) or murre was dead before the fish ate it, but others indicate that the fish attacked a live bird. Since those species of bird live and hunt in the sea, it’s easy to guess how they ran into hungry cod, but some freshwater fish have taken things further, striking out at pigeons walking on the shore, or even jumping out of the water to catch birds in flight.

Mammals on the menu

In Alaska, rainbow trout (Oncorhynchus mykiss) and graylings (Thymallus thymallus) have an even weirder, fuzzier target— shrews. Researchers have been slowly collecting evidence that the fish make a point of eating the tiny, mouse-like mammals, trying to see if there was any particular pattern to when the fish felt like grabbing a rodent for dinner. The shrews only turn up in fish at least 12-inches-long, and if larger fish are in the area, they seem to have exclusive rights to these fuzzier meals. The shrews turned up more often in fish bellies when their own populations were having a particularly good year, which might mean that more shrews are venturing near or into the water to gain access to bugs for their own dinner. They can kind of paddle around, but not well enough to evade a hungry grayling. Researchers don’t know if the fish are actively pulling the shrews into the water from the shore, but that hasn’t been ruled out either.

In Australia, another mammal is turning up in fish stomachs, but less is known about the circumstances there. Ecologists in northwest Australia are finding batches of spinifex hopping mice (Notomys alexis) in lesser salmon catfish (Neoarius graeffei) guts, usually in concentrated batches similar to the Alaskan shrews. However, while research in Alaska has mostly ruled out flooding as a reason for groups of shrews to end up in the fishes’ territory, this region in Australia is prone to flooding, which is thought to possibly be washing the mice and other small mammals out of their burrows. There’s also a chance the pursuit of insects is putting these mammals in harm’s way, but since these mice haven’t been seen ever paddling in the water, they’re less likely to be comfortable wading into the river than the Alsaskan shrews.

So does this mean the lesser salmon catfish are just being opportunistic scavengers instead of ambush hunters? With more flooding expected in the region, it may be a while before we have a chance to really decipher how safe those shores really are for small mammals.