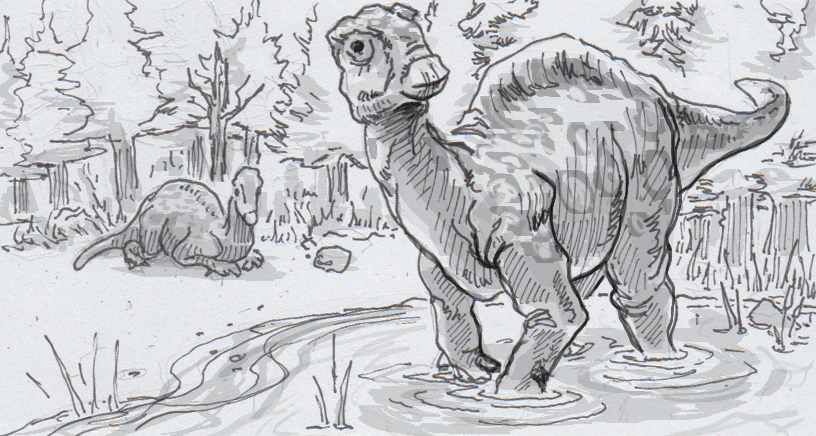 It’s a strange thing to say about objects 119-million-year-old, but my kids are totally spoiled about fossils. I’m by no means a trained paleontologist, but I remember when fossils were either mineralized bone or an impression left in other rock or sand. However, the last few years have raised expectations about what we might find preserved in stone, from wildly detailed skin to hearts and even the world’s first dinosaur brain. It’s almost to the point where I can barely blow my kids’ minds with this stuff anymore.

The heart comes from a Brazilian fish called Rhacolepis. The ancient fish lived around 119 million years ago, and was likely a carnivore. Of course, teeth and jaws are a dime a dozen in comparison to the first, verified, fossilized heart. Rather than rock that filled in a the cavity where a heart was once, this animals’ organs were amazingly well preserved. After X-ray tomography allowed for a 3D rendering of the heart, researchers have been able to see specific organic structures, including five rows of valves near the top. This detail allows for comparisons with other circulatory systems, helping us understand how hearts evolved in different animals.

To verify dinosaur brains, researchers employed a scanning electron microscope (SEM). This allowed them to examine what might be mistaken for a small pebble closely enough to see fossilized brain tissues. Strands of collagen, blood vessels and meninges, the tissue that surrounds a brain in the skull, were all identifiable, indicating that this was the brain itself, and not just a stone cast of the inside of the dinosaur’s skull.

If it were the inside of the skull, the brain would have probably been a bit bigger. This is because the tissues researchers found look like this dinosaur, some species of Iguanodon, had a brain structured very similarly to a modern reptile. As such, it’s brain wouldn’t fill it’s brain case in the skull entirely, leaving ample room for the aforementioned meninges. It would be great to compare this brain to what would presumably be a larger brain in the theropod family tree, since that is the lineage that led to modern birds with considerable, densely-packed gray matter. We just need to find more fossilized brains.

The search for hearts and minds

This brain and heart aren’t the only soft tissues we’ve found from the past, but they’re still unusual discoveries. Even hard structures like bones or eggshells need very particular conditions to successfully become fossilized, and the odds for soft tissues like muscles or organs are only smaller. In the case of the Iguanodon brain, researchers suspect that the dinosaur must have submerged its head into underwater mud almost immediately after death, allowing the brain to be pickled in a low-oxygen environment. Even after it was found, identifying these structures isn’t easy, but researchers have been gaining ground thanks to highly detailed scanning and 3D modeling. Aside from the improving technical capabilities now available, every new discovery also helps push the bounds on what people even think to look for. Discoveries that may become routine to kids growing up today are also training researchers to keep their eyes open to possibilities we were never supposed to find.