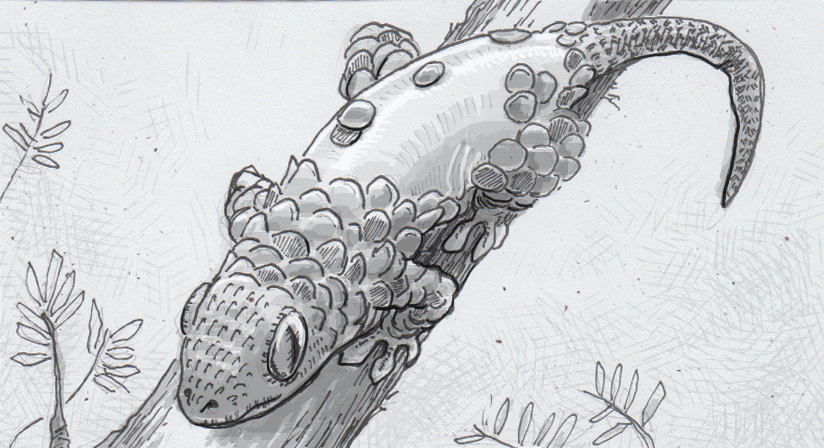 When facing a hungry predator, animals will do almost anything to save their own skin, even if that means sacrificing their skin in the process. In an unusual variation on autotomy, the strategic amputation of limbs or tails to help more vital anatomy escape a predator, a genus of geckos will actively sluff off their protective scales to avoid being eaten. The strategy is effective enough that it’s made studying the geckos rather difficult, as researchers could barely get a handle on the most recently discovered species, Geckolepis megalepis.

Slipping out of their scales

Geckolepis megalepis stands out among other “fish-scaled” geckos for just how far it takes this strategy. It has particularly large scales, some close to six millimeters in length, meaning each lost piece of armor reveals a larger patch of skin than most lizards would risk. It also means that more energy and nutrients are needed to replace each scale, which the geckos can still somehow accomplish in just a matter of weeks. The upside of these costly scales is that their size and thickness makes them more of a complication for predators as well. Each scale is big enough to potentially get stuck on a claw or tooth, leaving the unsuccessful predator more to deal with while the naked gecko slips away.

To be clear, G. megalepis isn’t a passive participant in all this. If the scales were simply loose, they might fall off at the wrong moment and be wasted, leaving the gecko with exposed skin before a predator was even around. The scales are somewhat loose, but they are actually separated from the gecko’s body when the gecko contracts its muscles in response to danger. It’s almost as if the scales are joined by perforated skin, so that it can be quickly separated on demand. Even though the gecko is loosing a bit of skin in this process, they somehow emerge looking smooth, pink and scar-free after a successful escape.

These interesting features also make studying fish-scaled geckos rather difficult. Even without threatening claws, researchers had a very difficult time capturing geckos with their hands or nets. They eventually had to be lured into bags so they wouldn’t trigger their scale-shedding flight instinct. Even once captured, it was difficult to classify G. megalepis, because the patterning on the scales, which a standard way to describe gecko species, was so inconsistent. Instead, researchers had to use micro-CT scans to make a 3D image of a living animal’s skull so that unique, and permanent, structures could be found to clearly specify who this new species was.

Source: A new species of gecko with massive scales and tear-away skin, Phys.org