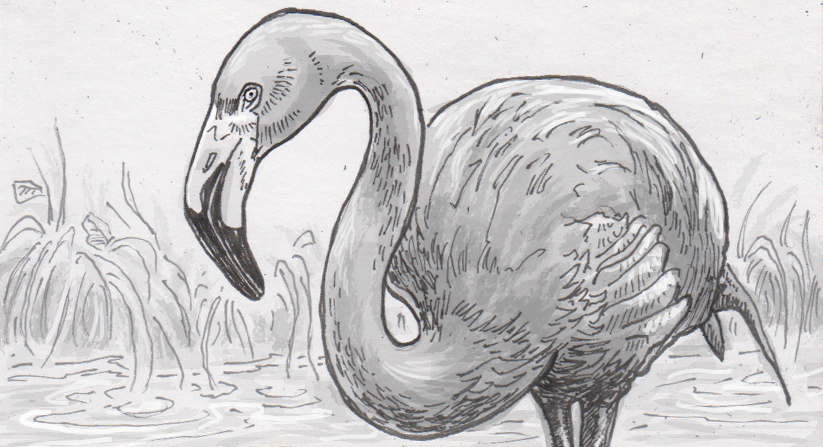 Flamingos in Florida turn out to have been locals all along

Flamingos aren’t exactly subtle, and yet people in Florida have been having a hard time seeing them for the last hundred years. It wasn’t that the tall, pink birds had adopted a new form of camouflage, or become nocturnal. The problem was that, as far as anyone knew. They just weren’t supposed to be in Florida. Any birds that were spotted where therefore explained as escapees from human captivity, temporary visits during a migration, or misidentified pink spoonbills. It took a new series of sightings, plus a stubborn flamingo on Boca Chica Key, to finally make it clear that some wild flamingos do in fact call Florida home.

The confusion started in the 1800s, because of hats. Flamingo feathers had become a fashionable addition to ladies’ hats, increasing demand for feathers to dangerous levels. Florida was home to some flamingos as the time, and the popular understanding was that that population was hunted to exhaustion in order to obtain feathers, not unlike the poaching of rhinos and elephants for their horns and tusks. The birds’ eradication seemed to be so complete that biologists had to check with historical records and specimens in museum collections to confirm that they’d ever really nested in Florida in the first place.

Obviously, flamingos have been spotted in Florida since the feather fad of the 19th century. However, they were then assumed to either be captive animals that escaped, in which case it was assumed that they’d be unsuited to survive in Florida and have minimal impact on the ecosystem. If a larger group was seen, they were expected to be birds from Mexico, Cuba or the Bahamas that were simply stopping over in Florida for a quick visit. However, without some way to track the movement of specific birds, this was all guesswork, which is why it was so lucky that a flamingo named Conchy was so uncooperative.

Conchy was a flamingo that regularly turned up at a Navy airfield on Boca Chica Key. To avoid collisions with aircraft, people from the airfield would regularly scare off visiting flamingos with loud noises like fireworks or shotgun blasts. Conchy caught people’s attention though because he didn’t flee from these sounds, inadvertently volunteering to be tagged in the process. Once he was wearing a radio tag, researchers expected that they could track his travels back to his native Mexico or Cuba, confirming what everyone had ‘known’ about Floridian flamingos all along.

As it turned out, Conchy wasn’t into traveling. Not only did the stubborn bird not like to leave the Navy airfield, but he also didn’t ever leave Florida. While his radio tracker functioned, researchers saw that he basically stayed put around Florida Bay all year long, never needing to migrate. His genetics haven’t been traced to any of the historical samples from Floridian flamingos before the 19th century, but Conchy and his flock have proved that Florida should be considered a viable flamingo habitat.

This is significant for legal purposes. Before this study, even tagging Conchy was a difficult issue, as researchers had to get special permission to purposely release a “non-native” animal into Florida. However, with the birds now recognized as natives, they’ve been taken off registries of exotic species, and instead will be treated as locals in the future.

My third-grader asked: Where do flamingos come from otherwise?

There are more than one species of flamingo, and as a group they can be found all around the world. Coasts in South America, the Yucatan Peninsula, Africa, the Mediterranean and India are all home to the mostly pink birds, although it’s the American flamingo (Phoenicopterus ruber) that’s now calling Florida home.