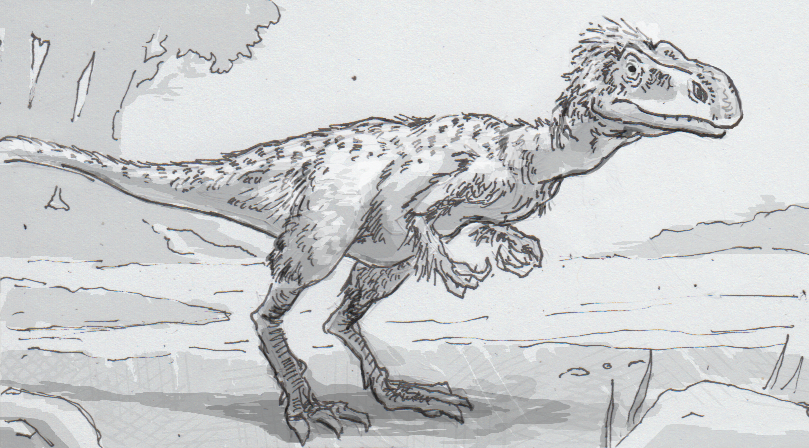 While it seems like a huge body, banana-sized teeth and a massive bite should explain Tyrannosaurus rex’s existence on their own, these record-breaking features have actually left a number of holes in the celebrity theropod’s origin story. Being able to chomp through a hadrosaur can be an obvious benefit once you’re big enough to do so, but for a long time paleontologists have been wondering how tyrannosaurs like T. rex and Tarbosaurus ended at the top of the food chain in the first place, since their distant ancestors were small enough to be considered “marginal” to their ecosystems. This is a gap that Timurlengia euotica should help fill in.

A step towards scaling up

T. euotica fits into the tyrannosaur fossil record as a nice mid-point in a couple of ways. Older tyrannosaurs were known from 100 million years ago and earlier, but the 20 million years leading up to big tyrannosaurs like T. rex were a blank slate. T. euotica, being 90 million years old, provides a crucial milestone in the family timeline. Complementing its role as a chronological stepping stone, T. euotica was also a step between older and larger tyrannosaurs. The theropod was 10 to 12 feet long, weighing around 600 pounds, a fair amount less than the seven-ton bulk of a T. rex, but hefty enough to possibly represent an upward trend in size.

As neatly as T. euotica fills in questions about the chronology and size of tyrannosaurs in the late Cretaceous, the most interesting features were those that seemed to be more advanced than anyone expected. While we don’t have a complete skeleton yet, we do have enough of T. euotia’s brain case to give us a sense of its mental capabilities. The brain case was scanned with a CT scanner, showing the structure of the original bone without needing to break open the fossil, and it showed room for a relatively large brain, as well as ear canals well-suited for detecting low frequency sounds (like footsteps of large animals, maybe?)

These same features were present in later, larger tyrannosaurs, and the timing of their development suggests that they may have been a key part of the genus’ success. While T. euotica was still living in the shadow of larger predators like allosaurs, when they went extinct a (relatively) short time later, it seems that these sophisticated tyrannosaurs were well poised to take their place at the top of the food chain. With brains already set for hunting, the remaining upgrades were just matters of scale- heads and bodies got bigger, while less crucial arms got smaller. It was still a dramatic set of changes to take place over a mere 10 million years, but we now have a sense of this critical juncture in the tyrants’ development.

Source: New tyrannosaur species reveals how king of the dinosaurs won its crown by Stephen Brusatte, The Conversation