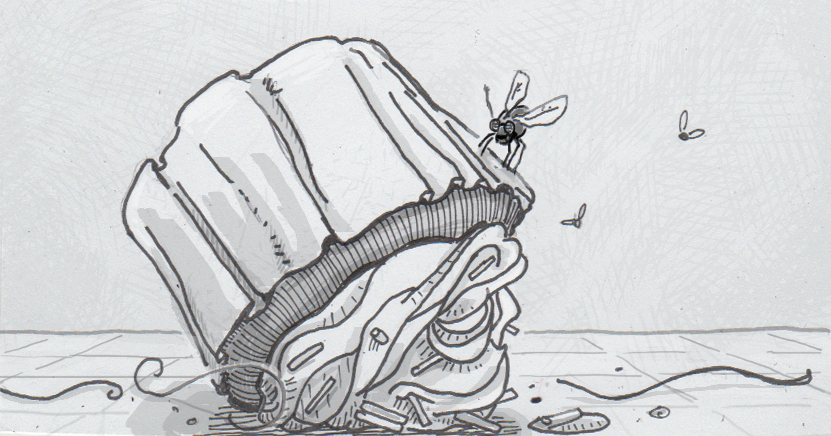 Floors, hairs and flies: When food goes from ‘ew’ to infectious

A clean kitchen can help keep potential pathogens out of your food, although that’s often easier said than done. Even if you handle obvious hot-spots like raw meat well, how much do you need to sweat the small stuff? How freshly scrubbed is your counter (or if you’re clumsy, floor?) Are you eating where bugs could stop by? Are you wearing a hair net? There’s a lot we have to wave off for practicality’s sake, but we may not always be assessing these risks from the most informed position.

Food on the floor

We’ve all dropped some food on the floor, and then wondered about picking it up and serving it. This dilemma come up even more often with small kids in the house, who seem to be especially surprised by gravity on a regular basis. Many people ascribe to the five- or ten-second rule, wherein if the food is picked up quickly, it’s assumed no harm is done. Timing does make a difference, but it’s not your time that counts, it’s the bacteria’s.

If the floor or counter has had enough time to grow a sizable amount of bacteria, five seconds or 20 seconds of contact isn’t really a point of concern any more. If the bacteria has been in place on the surface long enough to set up shop, it can quickly stick to your dropped bread or banana. The type of surface matters more than the food’s time on the ground as well— smooth surfaces like wood transfer bacteria much more quickly than carpet, so maybe factor that in when calculating the risk of a dropped morsel.

For many people, a hair in their food is much more offensive than a quick trip to the floor and back. Based on our strong reactions, is a hair a more serious thing to add to your diet? Again, timing and setting count here. Hair by itself is just harmless keratin proteins. One amino acid, L-cysteine, is even used as a preservative in commercial bread products, and is nothing to worry about.

The hair might be carrying bacteria though, although probably not enough to worry about. If it arrives in cooked food, there’s even less of a concern since the heat may have easily killed the bacteria. Bacteria from uncooked hair that’s spent some time on the food might have time to start multiplying to populations large enough to be a health risk. Unfortunately, hair can carry things as serious as staphylococcus, so your gross-out reflex might not be a completely useless response.

To round out the trifecta of contaminated food, we have the housefly. When a housefly lands on your food, it may or may not decide to have a bite. However, without teeth or jaws, “biting” is handled by regurgitating some digestive enzymes onto the food so that it softens enough to be sucked up. As gross as this externally-digested food sounds, it’s actually not a health risk. The bigger concern is the rest of the fly.

Flies of course like to check out food sources we instinctively avoid, like rotting food, garbage or even dead animals. We avoid these items because they’re prime breeding grounds for infectious bacteria like cholera, dysentery and typhoid. These bacteria can hitch a ride on the hairs that cover the flies over to your plate. As with the other items in this list, there wouldn’t be an instantaneous contagion on your plate, but finding settled flies on your food might be reason to pause, as they could potentially spread microbes to your food.

None of the above means you should be panicking about your food. Each scenario should be weighed by the degree your food has been exposed, and if you have reason to believe there are dangerous bacteria in the vicinity. Some small microbial exposures should be fine, and is likely better in the long run than trying to disinfect everything in your life.

Source: Is it Really OK to Eat Food That's Fallen on the Floor? by Paul Dawson, Live Science