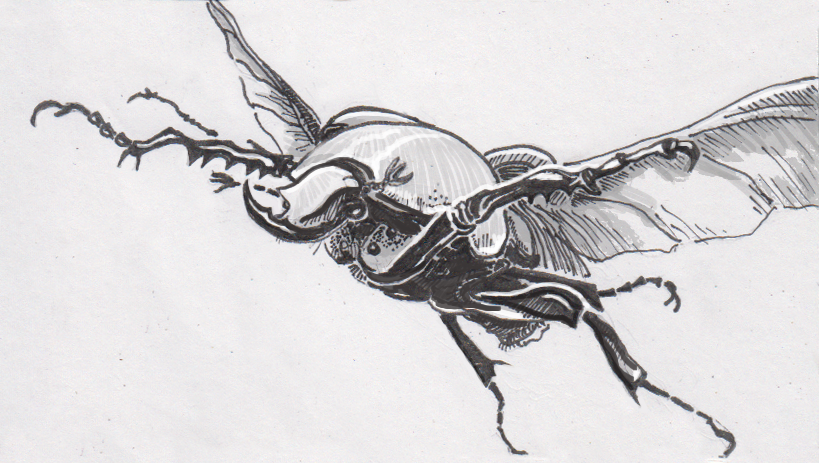 Flying beetles found to swing their legs to tighten their turns

When a bird flies, it tucks its feet close to its body to avoid creating turbulence in the air around it. So do dragon flies. So do large aircraft, even if they’re tucking in wheels instead of feet. Flying beetles, on the other hand, seem to have missed the memo on aerodynamics, because they do the exact opposite, flying with their legs outstretched in all directions. This certainly creates drag, which is why scientists suspected that this akimbo posture must offer some other benefit to beetle flight, like maneuverability.

It seemed quite plausible that outstretched legs could play a role in beetle steering, but scientists couldn’t just ask them why they flew that way to get an explanation. To get around this, they simulated flight for a beetle, then watched as it responded to turning either left or right in the air. Insects don’t have the inner ear we do to detect motion, relying almost exclusively on visual stimuli to tell them how they’re moving through space. So a beetle could be glued to a fixed point, and as long as stripe patterns in front of it looked like they were panning to the right or left, the beetle thought it was actually zooming around enough to demonstrate how it uses its legs in a turn.

When “turning” left, the beetle would pull in its right leg, doing the opposite when the visuals were reversed. So instead of simply pretending to not have drag-inducing legs, the beetles apparently put their legs to work, creating a rotational force to change their trajectory. At least, that’s what it looked like the beetles wanted to do, because in this first test they weren’t actually moving. To see if they were actually affecting their rotational inertia with these leg twitches, the insects were untethered and allowed to actually fly.

To isolate the role of the beetle’s swinging legs, researchers implanted electrodes to actually take control of their legs’ muscle movement. That way they could trigger the previously seen leg motion on its own, without waiting for the beetle to initiate a turn that might involve other motion. As expected, the swinging legs made a difference in the insects’ flight path, with small turning motions initiated in less than a fifth of a second. They don’t turn with their legs alone, but swinging their legs lets them begin a maneuver faster than they could if using only their wings.

My four-year-old asked: What kind of beetles were they?

In this case, researchers were working with one of the biggest flower beetles in the world, Mecynorhina torquata, which can grow up to 3.3 inches long. The green-shelled natives of Africa are robust aviators, and have been used in a number of different studies, including one that allowed researchers to completely control their movement, effectively turning them into a remote controlled bug.