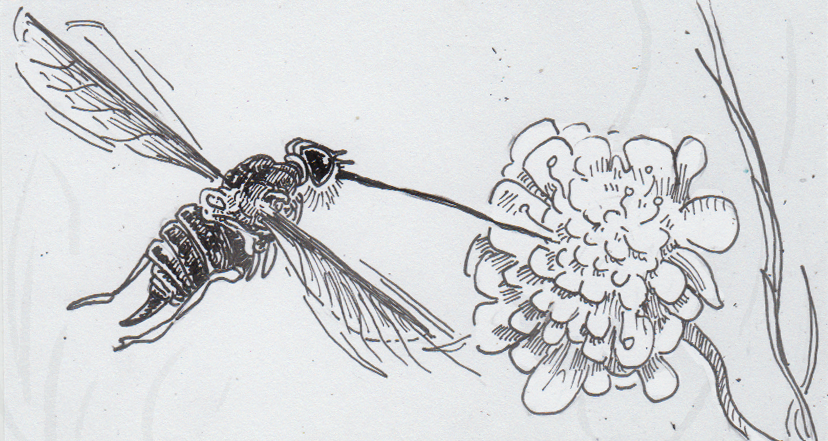 It’s rude to stick out your tongue, unless its so big you can’t really hide it away. While a hummingbird’s long tongue can be sheathed in it’s long beak, many insects don’t have anything to do with their equivalent of tongues, their proboscis, beyond trying to fold them up when they’re not in use. They can’t give them up though, since these specialized structures are their only way to gather nectar from the plants they visit.

While butterflies and moths can curl their tongues, some flies from South Africa have a much more awkward proboscis to work with. Prosoeca ganglbaueri‘s proboscis can grow up to five centimeters long. The tricky part is that the tube is stiff, so when the fly wants to move to a new location it basically has to fold the proboscis in half, which leaves the tip of it awkwardly extending past the length of the fly’s thorax.

Poky but not picky eaters

Amazingly, this rigid structure doesn’t limit the fly’s diet too much. They eat nectar from both shallow and deep flowers, although with the former option they have to carefully position themselves the right distance away from the flower so as not to poke through it. While they are known to eventually settle on favorite color for their flowers, that seems to be learned based on early experience. A fly that initially finds food only in pink flowers will favor those later in life, but flies growing up in more abundant neighborhoods won’t be so picky. It’s not so much a question of aesthetics as efficiency, since the flies don’t want to bother lining themselves up if there won’t be a meal to reward them for their trouble.

My first grader asked: Who has the longest proboscis?

The longest proboscis we know of is on the Morgan’s sphinx moth (Xanthopan morganii). The moths are pickier eaters than P. ganglbaueri, limiting their menus to nectar from the strikingly deep orchids of Madagascar. As such, the moth’s proboscis has evolved to match the 8- to 13-inch deep flowers.