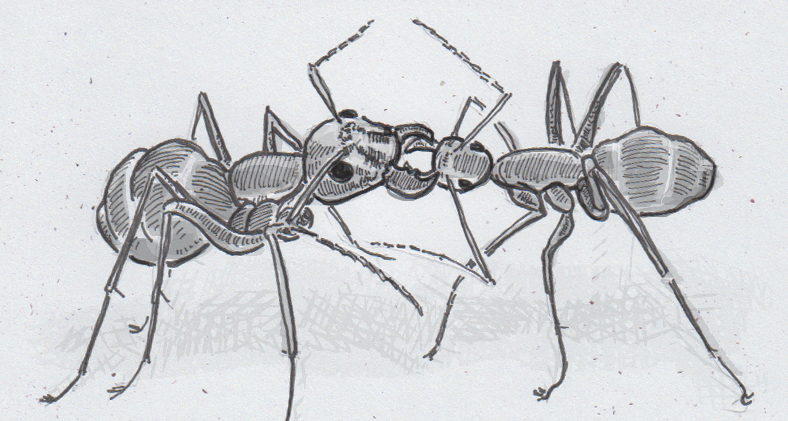 We’ve all heard that you are what you eat, but for social insects, diet may truly be destiny. This is thanks to the fact that among the various chemical signals and food that ants pass to one another, they also share trace amounts of growth hormones. When those hormones are passed on to developing larvae, it seems to shape what kind of job they’ll have when they mature.

The first step in this investigation was just to look at what insects like ants are doing when they pause for a quick oral interaction with each other. Most commonly among adult ants, these moments are used to feed one another in a process called trophallaxis. Works will pass food along to soldiers or nurses, who can then carry food to members of the colony that never forage directly, such as developing larvae. Obviously, ants, bees and wasps don’t have handy thermoses or baggies to transport these morsels, but they do have a specialized organ called a crop to save food for later regurgitation.

Messages with every meal

Knowing how much ants depend on chemical signals, like pheromones, to communicate with each other, researchers wanted to see if anything else was being shared beyond snacks. They analyzed the composition of the food being shared by Florida carpenter ants (Camponotus floridanus) and found a variety of proteins tied to different bodily functions, chemicals to identify nest-mates, and of course the aforementioned growth hormones.

The hormones had been seen in ant crops before, but they weren’t thought to be present in meaningful quantities. To see if they really were insignificant byproducts, some isolated ant larvae were fed with food spiked with growth hormone or an inert solvent. At the discretion of the nurse ants distributing food, the larvae that received growth hormones in their food grew into specific castes of worker ants. It seems that the nurse ants act a bit like career counselors, steering the paths of developing larvae to fill roles for the community at large.

Source: An ant’s kiss may hide a sneaky form of communication by Virginia Morell, Science