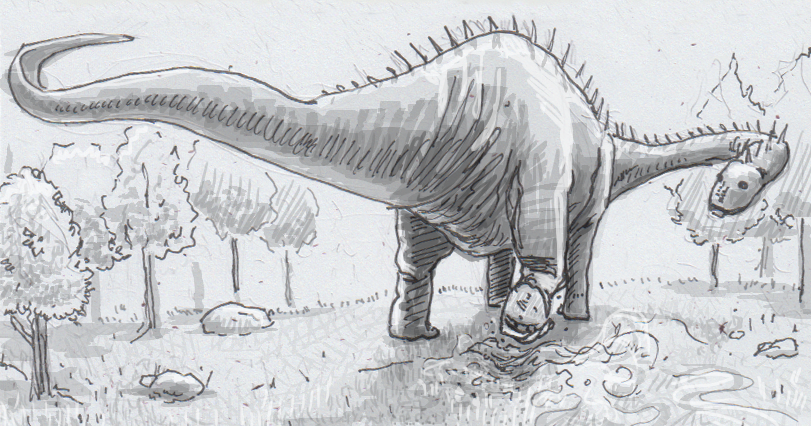 When you think of dinosaur claws, your imagination probably conjures images of curved blades on predators like Deinonychus, or the three-foot scythes on a Therizinosaurus. Maybe you toss in the hilariously dinky claws on a T. rex, but chances are sauropods don’t really come to mind. Maybe that’s because over the course of their evolution, these long-necked behemoths actually lost most of the claws on their front legs, but it may also be because of the murky understanding of what was happening with these dinosaurs’ back toes. A recent study is bringing these features into clearer focus, but the story that’s unfolding is still a bit strange, leading to some interesting new questions about how sauropods behaved, and why their feet don’t seem to have an analogue among any living animals today.

As sauropods grew bigger and bigger, their limbs needed to bulk up as well to support their massive bodies. Legs grew to resemble thick columns, and over the course of time the digits on these animals’ front legs were reduced to one or no toe claws. With a growing emphasis on vertical support, this might no seem odd if not for the contrast this trend struck with sauropods’ back claws, which grew bigger. Weirder still, analysis of the muscular attachments of these claws indicates that they could be contracted across the front of the foot, swiveling and overlapping into a single, curved ridge. This ability to transform their rear feet into shovels or garden hoes understandably caused a lot of head scratching, with hypothesis emerging about everything from traction to nesting.

No signs of slips

While skeletal analysis did help put together how the toe claws folded together, actual footprints were needed to help figure out when those claws were being put to use. Fossilized trackways from all over the world were compared, particularly to test the idea that sauropods were curling their claws to improve traction on slippery, muddy ground. Since many tracks were originally made in squishy, soft mud, signs of slipping should presumably turn up whenever a dinosaur was catching their balance. However, the opposite proved true— no muddy prints indicated any sauropods were curling their claws to hold steady with the toes most often seen straightened out instead. This is further backed up by the fact that not all sauropods were contending with slick ground enough to warrant such a clear direction in their evolution.

Who did the digging?

A more universally appreciated ability could have easily been nest digging. The advantage of a nice, curved foot-shovel would have been useful to sauropods around the world if it meant more successful reproduction thanks to safer eggs. However, even with a plausible motivation, this hypothesis raises new questions about sauropods’ weird feet— did both sexes dig with their claws? How were these duties divided? If digging wasn’t a shared job, is there a way to identify a skeleton’s sex from wear on its claws? It’s a strange situation, but if more detail can be uncovered about sauropod claws, their iconic necks may stand a chance of being eclipsed by their crazy feet.