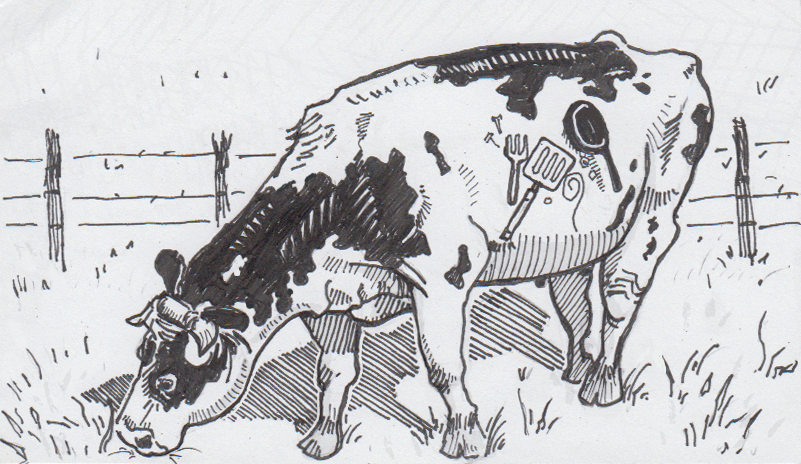 For cows, a magnet one day can keep the surgeon away

Cows aren’t the most careful eaters out there. They basically rip up anything they can when they’re grazing, chew a bit, then swallow. This is only the beginning of their digestive process though, as the food will famously make it’s way through the cow’s multiple stomachs, get chewed again as cud, etc. But when the cow grabs something in that initial bite that wasn’t food, it can become a dangerous hazard in the cow’s belly.

When a cow gets too much iron in their diet

One of the biggest concerns is that the cow will pick up lost tacks, nails, wire or other bits of metal debris out in the field. These sharp metal objects will usually pass through some of the cow’s digestive tract before stopping at the reticulum— a chamber meant to sort foodstuffs either for further digestion or further chewing. But metal doesn’t fit into this system well, and can either lead to inflammation of the stomach walls, tearing of the stomach with possible damage to the animal’s heart (located next door), or blockage bad enough to require surgical intervention, conditions collectively known as “Hardware disease.”

That surgery is fairly involved, and as it involves the immediate release of previously blocked digestive tract, fairly disgusting: “The stinky contents rush out under pressure and coat the barn floor, the surgeon and anything else within range.” Fortunately, there’s a fairly reliable and easy method to help prevent hardware disease, and all it requires is having the cow swallow a piece of metal.

The metal that is purposely fed to the cow is a magnet. It’s a couple inches long, and fed through a tube to get it started on its journey to the cow’s reticulum. Once there, it will stay and gather up any stray nails or wire the cow may have swallowed, keeping them from causing damage to the reticulum walls. The cow will keep the magnet for the rest of its life, and can be checked for by holding a compass near the outside of the cow to see if it reacts to it. The system isn’t flawless, as non-ferrous metals like aluminum from soda cans aren’t affected, but it’s certainly easier on everyone than surgery.