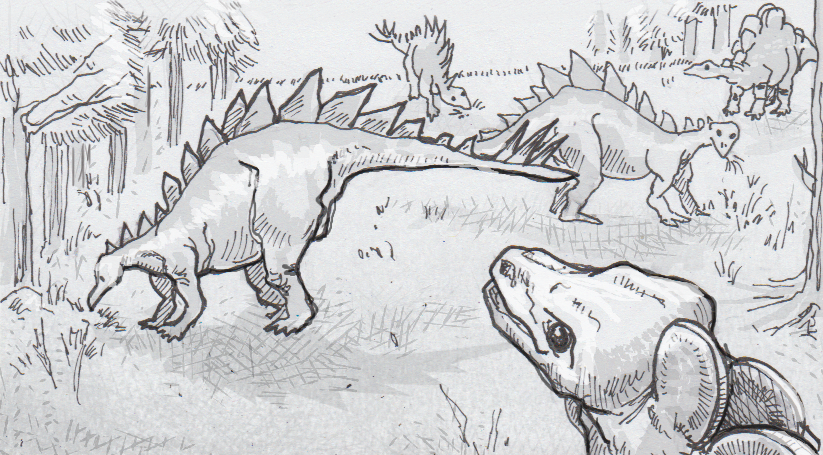 Male lions have manes, female black widows are nearly twice the size of males, male deer have antlers— the list of sexually dimorphic animals goes on and on. We’ve suspected that some dinosaurs, like Parasaurolophus, exhibited sexual dimorphism, but it’s hard enough to prove which fossil specimens are male and female, much less patterns about their relative body shapes. Fortunately, thanks to what’s being called “the best stegosaur site in the world,” we may be able to add Stegosaurus mjosi to the list of identifiably dimorphic species.

When six stegosaurs were found at the same location, it allowed researchers to make comparisons between the specimens and detect patterns that would be impossible with just a single animal’s fossils. Differences were visible that had previously been attributed to two different species of stegosaur, but since these skeletons were clustered together as a group, it’s now thought that they were all the same species. Analysis showed strong enough matches between the bones to declare their relation, and that the second species never really existed.

Those bony plates look really feminine on you

The differences that remained focused on the stegosaur’s back plates. Some animals had narrower, more pointed plates, while others had larger, rounder plates. Growth patterning in the skeletons confirmed that all these animals were adults, and so the differences in plate shape and size were not due to age. While individual variation could be at play here, the two styles of plate strongly aligned with sexual differences.

At this point, the guesswork gets ratcheted up a few notches. While the dimorphism has good physical evidence, attributing which plate style to which sex required a bit more inferred conclusions. The line of thinking then went that since many modern herding herbivores, like bison, have larger males, it would reason that the round plates, which were as much as 45% larger than their pointy counterparts, were on the male stegosaurs. Just as male bison or deer have large ornamentation to aid with courting mates, the rounded plates would have been used for sexual display. We can only imagine the dancing and posturing that must have gone along with these bony equivalents of a peacock’s tail.

My kindergartner asked: Why did the girls have the pointy plates? She assumed that, like deer and possibly pachycephalosaurs, the male stegosaurs would have dueled for mating rights, and figured that pointy plates would provide better protection. This could have been the case, but then again, if you’re fighting another stegosaur, neither plate style seems like the best protection against a low-slung thagomizer.