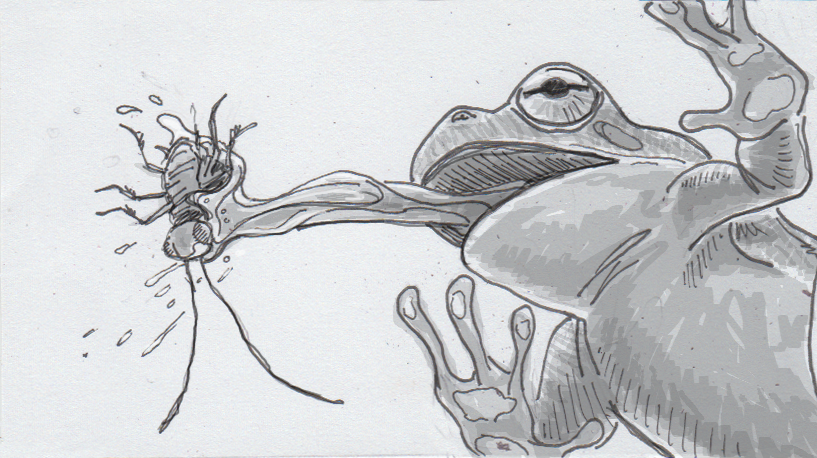 The formidable, and sticky, features of a frog’s deadly tongue

When we think of predatory adaptations, we tend to focus on the sharp, pointy bits found on large carnivores. Razor-sharp claws, large fangs or rows of knife-like, serrated teeth stand out as some of evolution’s most impressive weapons. However, if we were smaller creatures, we’d sure include frog tongues among our list of dangerous anatomy, because they’re actually incredibly specialized and efficient tools for snatching prey from a distance so quickly the insect hardly has time to know what happened to it. Not all weapons cut the skin— some are just very good at slobbering all over it.

Once the tongue comes into contact with its target, it has a number of tricks to maximize contact. The tissue itself is incredibly soft, with comparisons ranging from ‘brain tissue’ to ‘marshmallow.’ This allows for the tip of the tongue to sort of wrap around an insect, enveloping it as much as possible, rather than striking it. Once the bug has been grabbed, the elasticity of the tongue can reel back in, since a quick yank might loosen the hold on prey. The final component of the tongue anatomy is the fact that a frog’s tongue is home to the spongy salivary glands, cranking out generous amounts of very specialized spit.

Frog saliva is sort of like reverse Silly Putty. Silly Putty, as a non-Newtonian fluid, reacts like a solid under force, but then softens without it. Frog spit, which is technically a shear-thinning liquid, basically does the opposite. It liquefies in reaction to pressure, but then thickens after the force dissipates. This allows the spit to act like more like a liquid when it hits and splashes against a bug, getting into as many folds and crevices as possible, then thicken when it’s time to reel the now very sticky meal back in. All this glues bugs so tightly to the frog’s tongue that they have to squeeze food down their throats by pushing down into their mouths with their eyeballs, which literally sink down into their skull in the process. This pressure makes the sticky slobber thin out again, loosing the hold on the bug enough to swallow it.

Altogether, it makes biting and chewing seem sort of primitive, albeit a bit less sticky.