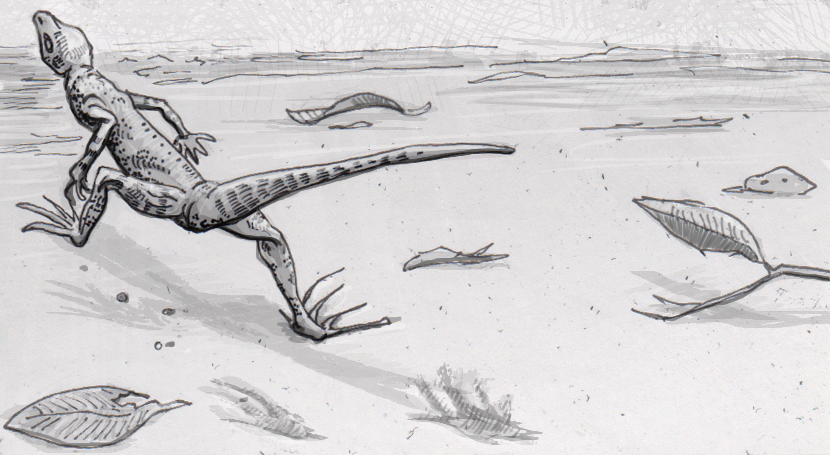 110 million years ago, a small lizard near the coast of what is now South Korea was being pursued by a pterosaur. To better evade the predator’s attack, the lizard appears to have reared up, sprinting on its back legs across the moist sand. This upright-sprinting not only gave the lizard a boost in speed, but probably helped the lizard’s maneuverability, making it that much harder for the pterosaur to catch.

My third grader asked: Wait, the lizard ran upright? Like a human?!

Well, not exactly like a human, as lizards’ legs are angled out to the sides of their bodies, rather than under them. Looking at the 50 species of living lizards that can also pull off this maneuver, they don’t look a whole lot like humans as they run. In some cases it’s almost supernatural looking, as when the basilisk or “Jesus Lizard” (Basiliscus basiliscus) sprints across the surface of water.

My third grader said: Oh, like Dash from The Incredibles.

Ok, they’re not quite that fast, but the lizards that run on their hind legs today to move pretty quickly. That speed may even help explain how they started running this way to begin with— one hypothesis is that as a lizard with smaller front legs picks up speed, their center of gravity effectively moves back to their hips. They can then tip up over their hips, making turning easier compared to running on all four legs. However, that uses a lot of energy for a cold-blooded animal, which is probably why they’d save it for critical moments instead of becoming bipedal all the time.

Scientists aren’t actually sure how, or when, this behavior got started. Small lizards don’t get fossilized as often as bigger animals, so we don’t have tons of examples of every intermediate form that would hint at changes in the reptiles’ gait. Fossilized footprints aren’t common either, and these particular tracks aren’t only the first record of a bipedal lizard’s movement, but of any lizard at all.

My four-year-old asked: How are they sure the tracks are from the back feet only?

The tracks are clear enough to preserve specific details about the feet that made them, right down to toe and claw placement. There are a couple of prints that appear to be from the lizard’s front feet towards one end of the trackway, which help contrast from the back feet as well, particularly in their size. Combined with the distance between each foot, it all matches what might be expected when a small lizard was making a quick dash on its back legs.

Of course, it’s hard to be absolutely certain about something like a footprint. There is always a chance that the lizard was walking on all four limbs, but that the smaller front legs just weren’t making impressions in the soil. There’s not a lot to suggest that that’s the case, but it’s good to keep in mind that footprints alone aren’t giving us the whole story.

My third grader asked: So are we sure it was a lizard? How do they know it was being chased by a pterosaur?

The feet do match the anatomy of a lizard, and there’s no doubt that this type of animal was alive 110 million years ago. What motivated this particular critter to take off running is much more speculative— Yuong-Nam Lee, the paleontologist who discovered the tracks, was originally searching in those rocks for pterosaur prints. At first, he barely paid attention to the lizard prints once he realized they weren’t from a pterosaur. So while pterosaurs likely lived in the vicinity of the sprinting lizard at some point, there’s no direct evidence that these tracks were made to avoid being eaten.