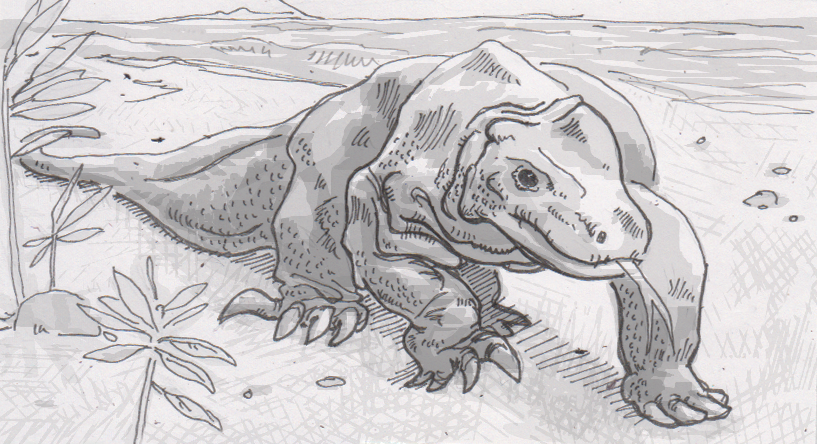 One of the ways you end up with oversized animals is through a process called island gigantism. A species finds itself geographically isolated, and with fewer large carnivores to compete with, it’s easy to start growing bigger to take over unoccupied space in the food chain, even with an animal like a swan. From that frame of reference, it’s easy to see how people assumed that the largest lizard alive, the Komodo dragon, evolved in this manner on it’s island homes in Indonesia. As convenient as this explanation would be, new fossil evidence from as far as Australia is suggesting that these lizards got big before they came to dominate their current ecosystem.

Komodo dragons (Varanus komodoensis) are a bit like giant-sized monitor lizards, but there’s a bit more to them than just being big. Their bites are known to cause swelling, blood clotting and shooting pain, similar to the the bit of a lace monitor lizard. However, it’s not completely clear if they actually inject venom in their bites, or if these reactions are just due to the particular cocktail of fluids in the reptiles’ mouths. This follows other debates over highly septic oral bacteria, although that was eventually tied to prey stumbling into contaminated water. While venom may have been inherited from smaller brethren in the monitor lizard family, it’s still a puzzling investment when you’re the biggest predator on your island, growing up to ten feet in length and weighing as much as 366 pounds.

Of course, some extra predatory juice may have been necessary if these lizards weren’t always the biggest hunter in the neighborhood. Fossils found in Australia are indicating that Komodo dragons didn’t scale up in Indonesia, but were living in a much bigger ecosystem alongside giant marsupials around three million years ago. The extinct species were at least as big as modern Komodo dragons, possibly because they needed to somehow stay competitive amongst creatures like the 20-foot snake Wonambi naracoortensis or the hulking proto-wombat, Diprotodon optatum.

Even with considerably fierce competition, Komodo dragon ancestors in the varanid family did fairly well, spreading out westward across Australia around a million years ago in the Pleistocene. This was a high water mark for the lineage, as Varanus priscus grew to nearly 23 feet in length, making it the largest land-lizard ever. Early migrating humans may have actually overlapped with species like V. priscus, but not for long as the lizards went extinct not long after their arrival in Australia in the Late Pleistocene era. Even after the “mainland” komodo dragons died out, some populations remained on islands like Flores, Rinca, Gili and of course, Komodo.

The fact that modern Komodo dragons are smaller than their counterparts from the fossil record brings up a second effect of island isolation: island dwarfism. The shift in body size probably doesn’t qualify in this case, but once sea levels changed, modern Komodo dragons found themselves unable to mingle with populations from Australia. There they could hunt large storks and tiny elephants, all while eventually shrinking to their current size, which still leaves them in great shape to much on just about anything they can get their mouth on.

Source: Here be dragons: the million-year journey of the Komodo dragon by Hanneke Meijer, The Guardian