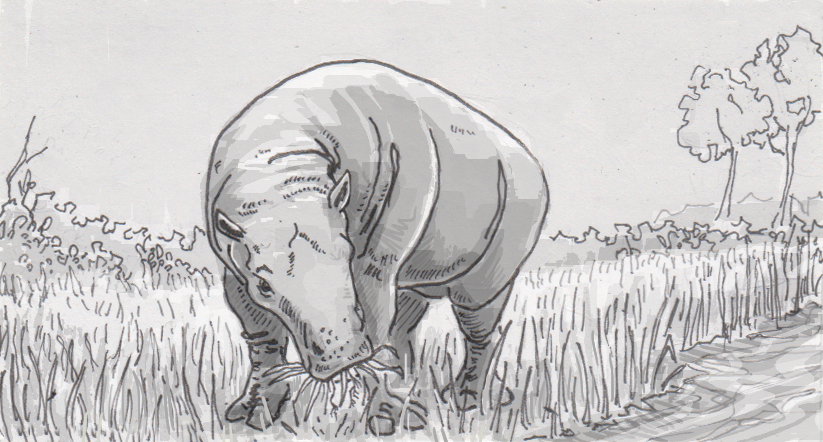 The average modern hippo spends most of its day in the water. In rivers all over Africa, these huge mammals dominate their local waterways, although they’re not there for the fishing. Most evidence suggests that water functions as a way to beat the African heat while facing less competition for territory. It’s a niche this family of animals has only come to dominate in the last eight million years, and even then, it probably only began because of grass.

Hippos started specializing as a family around 55 million years ago. Like the cetaceans they were parting ways with, they spent their lives on land alongside many other Eocene animals in from southern Europe to to Africa to India. They generally had more slender heads than a modern Hippopotamus amphibius, balanced by slighter bodies as well. The latest fossils from Ethiopia suggest that the big transition to the bulbous, river-dwelling animals we know today started eight million years ago. Within a relatively short one-and-a-half million years, African rivers all over the continent were well stocked with hippos, each biding their time for the nightly visit to the salad bar.

A tale told in teeth

The key fossils from this recent Ethiopian excavation relate to the newly named species, Chororatherium roobii. While known primarily from its teeth, C. roobii seems to be a sort of missing link between earlier ancestors like Kenyapotamus and more modern animals. Tooth sizes fit neatly between the smaller and larger members of the family, demonstrating the evolutionary scaling up that led to today’s 3,300 pound behemoths. More importantly, the teeth also show transitional features in the the shaping of cusps on lower molars. While not yet definitive, this change in shape would have helped C. roobii eat grass, closely resembling the dentry of H. amphibius.

This specialization in lawn mowing was probably a big step in hippo history. Based on how many hippo fossils are found in different layers of rock, the transition represented by C. roobii was a bonanza for these mammals. Hippos usually constitute six percent of the fossils found in older Miocene rock layers, but they constitute as much as 30 percent of fossils found after the rise of species like C. roobii. Researchers hypothesize that this is because grasses were spreading across Africa at that point, supporting hippos along the way. C. roobii was then part of this expansion, eventually planting hippos all over the continent, much to the chagrin of the crocodiles who were there first.