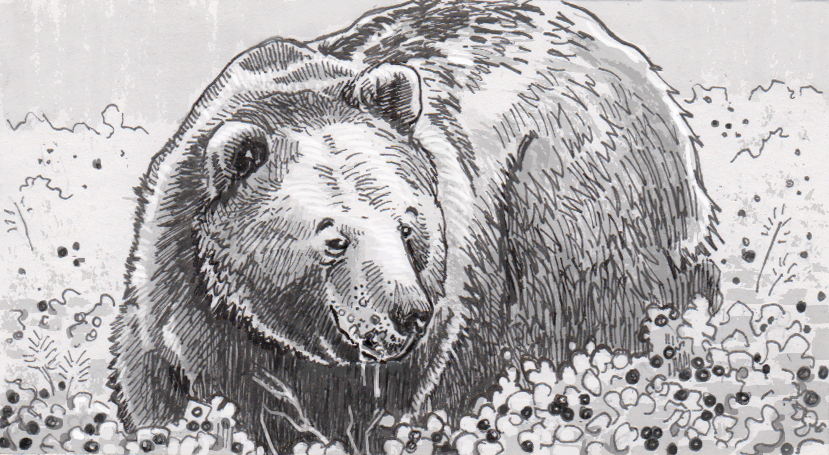 Skeletal fossils help describe the shape of an ancient creature, as they were literally part of the animal’s anatomy. Trace fossils record an interaction of some sort, such when a dinosaur stepped into some soft mud to make a footprint. In some cases, paleontologists get lucky, and find both types of evidence at once, as with a collection of cavity-pocked bear teeth found On Ellesmere Island in Canada.

The 3.5 million-year-old teeth not only describe the dental anatomy of two Protarctos abstrusus, but they show evidence of how their behavior ate holes in their teeth. Eliminating speculation about what events lead to the small bears’ dental decay, the fossils were found alongside an ancient collection of raspberry, blueberry, lingonberry and crowberry plants. Like 44 percent of modern bears, it seems that a love of sugar-filled foods caused a fair amount of damage to these animals’ teeth while they were alive.

Bulking up for winter since bears began

The evidence suggests that this kind of sugary, high-calorie diet was readily available millions of years ago, but it certainly isn’t present any longer. The area is now a polar desert, but in the Pliocene it was 20 degrees warmer, and able to support a forest full of trees, primitive horses, beavers and deer. However, the winters were cold enough to freeze, which is probably why P. abstrusus was looking to bulk up on berries— all that sugar would have helped the bear pack on fat to help it hibernate when food was scarce.

If those berry-binges truly were part of the bears’ preparations for winter, it would be the earliest known example of this behavior. While this species is not thought to have been a direct ancestor of modern species like the black bear, the fact that it hibernated to survive northern winters shows that this strategy must have developed very early on in bears’ evolution.