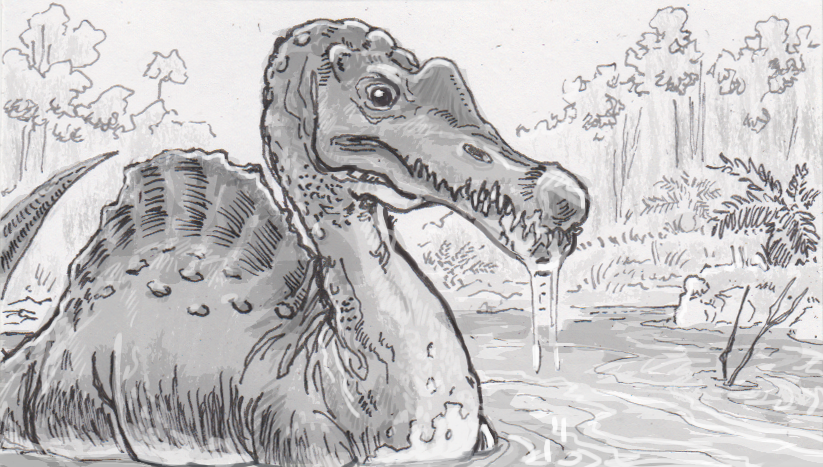 It’s a weird situation when half of a femur can reshape what we know about a whole family of dinosaurs. A fossilized thigh bone isn’t nearly as eye-catching as a well-preserved skull, feather imprints or mummified skin, but thanks a scarcity of fossils from spinosaur dinosaurs, even a single femur can be significant. The bone in question hasn’t even been assigned to a specific species, but its location and age are still adding to our understanding of how these semi-aquatic apex predators evolved in the Early Cretaceous Period.

The as-yet-unnamed femur was found in the Araripe Basin in what is now Brazil. At the time of this spinosaur’s life, the region would have been marked by a series of shallow lakes that stretched into what is now Africa. Eventually, South America and Africa would obviously separate, but in the early Cretaceous they were close enough to allow spinosaurs to move and specialize in both continents.

Spinosaurs in both South America and Africa appeared to be formidable predators. They all possessed long, crocodile-like mouths loaded with thin, pointed teeth that were primed for eating fish, although we have some evidence that they weren’t so picky that they wouldn’t much on something like a pterosaur if given the chance. Most species probably hunted from the shores of the aforementioned lakes, moving about on their hind legs like other predatory theropods. However, Spinosaurus specifically may have spent more time in the water, as some of the skeletal fragments that have been found look like they came from a more horizontally-oriented swimmer, although that’s still a matter of some debate among researchers.

This new femur then adds a new wrinkle to spinosaur ecology. The bone came from a large animal, estimated to be around 33 feet long when it died, but young enough to probably still be growing. This fits with spinosaurs’ general position as apex predators in their ecosystems, no matter if they were swimming or just wading along the shore. Most importantly, the femur was very dense and heavy, contrasting most other dinosaurs’ evolutionary paths towards lighter, more hollowed-out skeletons. The most likely advantage of that extra weight would come in the water— living animals from penguins to manatees have unusually heavy bones that help them sink in the water. This in turn saves them energy, as they don’t have to work so hard to remain submerged, a handy trick if you’re trying to ambush prey. This trait is also present in the African, more-aquatic Spinosaurus, but this new femur predates that species by ten million years, suggesting that an earlier shared ancestor was using its bones as ballast even further in the past. Perhaps being bogged-down in a lake was more widely spread among spinosaurs than previously understood.

This may sound like a lot of speculation for some rather eye-catching dinosaurs, but many of the aforementioned animals are only known from a small number of bones. Spinosaurus has a famously rough past, with our conception of the creature’s anatomy likely being cobbled together from multiple specimens, and possibly multiple species. In Brazil, the fossil record seems to practically be trolling paleontologists— a spinosaur named Irritator challengeri is known from a skull missing it’s snout, while Angaturama limai is known only from a piece of snout. To top it off, those two species may actually be from a single lineage, with the bones actually representing a single species at two different ages. Fossils aren’t easy to come by, but it’s odd that a large, thick-boned predator that spent a lot of time near underwater sediment wasn’t preserved more often, but for now, even the broken bones count for a lot. Researchers are hoping that the Araripe Basin will eventually yield some more complete specimens, possibly to answer questions about these dinosaurs’ posture, ecology and if all that time spent half-submerged in the water helped them grow to be the biggest predator to ever live on land.