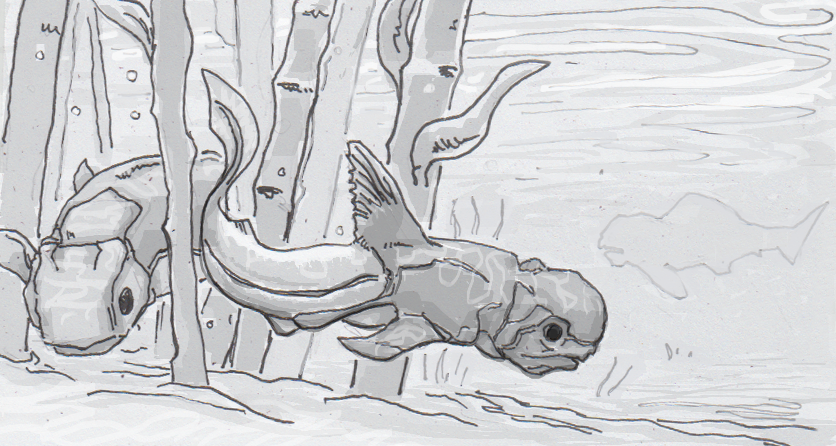 Placoderms were some of the early adopters of sturdy, biting jaws. These ancient fish from the Devonian period sported impressive, armored plates along their faces, complete with innovation jaws that paved the way for future chomping animals, from Tyrannosaurs to humans. Compared to the ostracoderms, jawless fish that looked a bit more like swimming horseshoe crabs, it would seem that placoderms were the most intimidating things in the water. Even so, their young seemed to still need protection until they were large enough to head out into the open sea, which is probably why so many were clustered together in what was likely a fish nursery from 360 million years ago.

The nursery in question was found in a quarry in Strud, Belgium. It stood out to researchers because it contained a collection of small, immature, fossilized fish clustered together, as well as some larger fish as well. The mixed maturity levels helped paleontologists rule out the possibility that the smallest fish were simply assembled by accident, possibly pushed by water currents to that particular location. Instead, it looks like young fish from at least three different species of placoderm were purposely living together at a single location, and that that location was accessible to some slightly older fish as well.

Safety along the shore

This particular spot was probably worth sharing because of the safety it afforded the developing fish. Sediment patterns in the rock indicate that there had been slow, shallow water, plus a collection of large and even spiny plants at that location. These features would have provided the young fish refuge from larger predators, very similar to how many modern fish lay eggs or bear young along shorelines that offer some natural protection for tiny spawn.

The fact that multiple species of fish, including Grossilepis rikiki, Turrisaspis strudensis and Phyllolepis undulata were present is also reminiscent of modern fish behavior.  Various species of fish are known to use similarly protected environments, like coastal estuaries, as safe places to live before moving out to deeper water. The fossils from Strud don’t definitively prove the placoderms were behaving similarly, but coupled with a similar site found earlier in Pennsylvania, it does suggest that these reproductive strategies may have first developed millions of years ago.