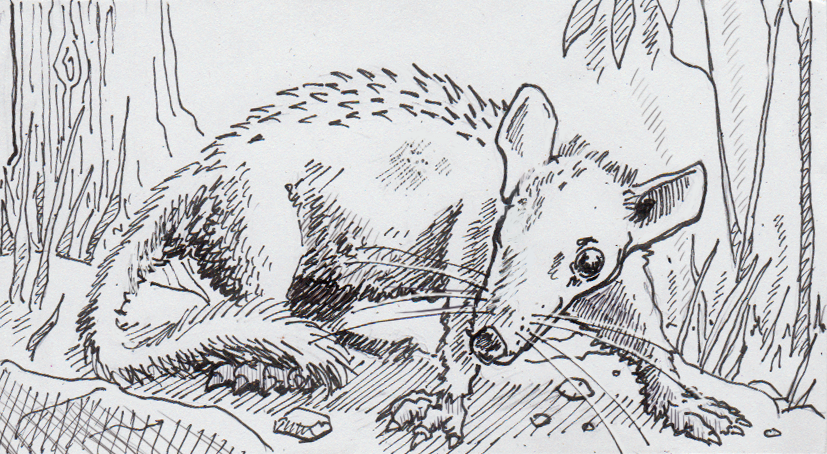 Most of our fossils are bones. Organs, muscles and skin are poorly suited for the slow process of mineralization, as they decompose (or are consumed) too quickly to be preserved. Much of the information we have about these more delicate tissues has come from trace fossils instead, such as hardened imprints from delicate feathers on a theropod. This doesn’t mean that fossilization of a body’s squishy bits is impossible though, and a recent discovery in Spain has raised the bar on how much of a body can be preserved. The 125 million-year-old mammal has identifiable lungs, liver and hair, providing amazing details about the evolution of mammals in the Mesozoic.

The mammal in question is a new species, named Spinolestes xenarthosus. Like many mammals in the Mesozoic, it was a small creature weighing only around two to three ounces, growing up to around nine inches in length. It’s assumed that it would have been mostly nocturnal, as mammals generally needed to stay out of the way of the larger dinosaurs who dominated the ecosystem. S. xenarthosus‘ feet indicated that it was a burrower more than a climber, and its reinforced spine probably helped it pry and shred rotting plants to find insects to eat, like a modern armadillo or shrew. Rounding out its outward appearance were some well preserved hairs, some growing into thicker spines like a hedgehog. These delicate structures also showed signs of a fungal infection, rotting some hairs away in a discolored patch of skin.

Internally, S. xenarthosus wasn’t a template for specific modern species in quite the same way, but some organs were fossilized clearly enough to glean some information about how the animal lived. A lung, complete with branching, tubular structures was found in the upper abdomen. Lower down the trunk, a fossilized liver, complete with reddish brown coloring, wasn’t completely intact, but close enough to identify. The two organs were clearly separated though, which may be a clue about the missing musculature. The gap was likely home to a strong diaphragm which would have let the mammal breathe rapidly and deeply, appropriate for the bursts of activity you’d expect of a small creature scurrying under some of the biggest feet the world has ever seen.

While the quality of these fossils is amazing, and record setting as the oldest mammalian innards ever found, the significance of S. xenarthosus in the story of evolution is likely how normal and recognizable all these features were. While the larger family S. xenarthosus belonged to, the triconodonts, went extinct, many of these features were obviously developed nearly to their modern forms over 125 million years ago. While there has been bursts of diversity among mammals since the Cretaceous, many aspects of our anatomy have apparently been in place for ages.