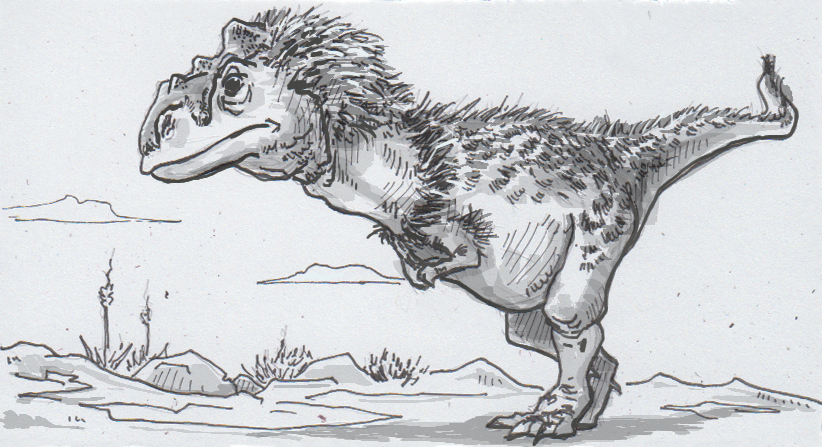 My three-year-old is very excited about growing bigger. He’ll be able to go on more rides as the amusement park, reach inaccessible treats in the kitchen, and maybe have an easier time intimidating his older sister. Amusement parks aside, access to food and being bigger than the competition are both thought to influence the growth rate of animals. Blue whales, for instance, grow extremely rapidly, which helps them avoid being attacked by predators that generally leave the adult-sized whales alone. Looking further back in time, fossils of large sauropods also grew big in a hurry, again to avoid looking like lunch to predators.

On the flipside of this equation is the Cretaceous period theropod, Majungasaurus crenatissimus. Originally discovered in Madagascar, these 20-foot-long predators were at the top of their food chain, with literally no other threat but each other. Driving that point home, tooth marks and apparently swallowed bones indicate that M. crenatissimus were only eaten by each other, although there’s a chance that this cannibalism was actually the result of scavenging, not active predation. Whatever the motive, the threat didn’t seem to be significant enough to spur theses dinosaurs to outgrow each other in any kind of hurry.

A recent study took samples of a rib, pubis, scapula, phalanx, metatarsal, fibula, tibia and femur, all to look at the internal structures for growth indicators. Each sample was shaved down until it was thin enough to be translucent, then looked for lines of arrested growth (LAGs), which are a bit like tree rings. The closer the lines were, the less the dinosaur grew that year. In the case of the sampled M. crenatissimus, it appeared that it took nearly it’s entire life of 27 years to reach its full size.

Growing slow and steady may have been the result of a few different factors. Other allosaurid fossils indicate that closely related theropods may have also grown slowly, but that doesn’t necessarily explain the evolutionary pressure to do. For that, scientists believe that M. crenatissimus likely lived in an environment of droughts and floods, and that an inconsistent food supply would not have favored a rapid growth rate. Coupled with a lack of larger predators to worry about, taking things slow may have been these predators best chance for survival.

My second grader asked: How fast to humans grow compared to other animals?

For a warm-blooded mammal, human children put on pounds at a rate closer to a reptile than our fellow primates. Our long childhoods are thought to be tied not to a lack of predators, but to the caloric demands of our big brains. They take a lot of resources, and thus may demand that the rest of the body hold off on growing up too quickly.

Source: Fearsome Malagasy Dinosaur Remained a Pipsqueak Most of Its Life by Laura Geggel, Live Science