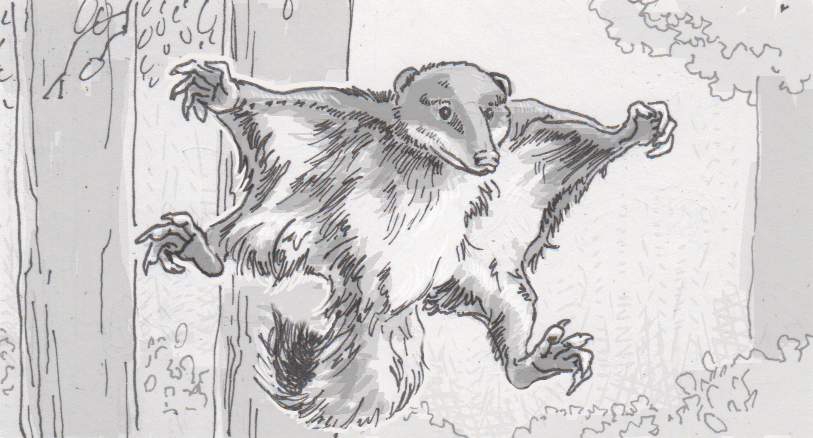 Who knew gliding between trees on giant armpit pouches was so popular? While this kind of tree-hopping has been proposed as a starting point for winged flight, it’s apparently a successful enough strategy to have evolved repeatedly in the history of four-limbed animals. The two latest examples originate from the Jurassic period in what is now China, and were discovered in fossils so well-preserved the outline of the animals’ skin flaps were visible in the surrounding rock. At first glance, these creatures strongly resembled a modern flying squirrel, but closer examination reveals that they weren’t direct relatives of any modern glider.

The skeletons of Maiopatagium furculiferum and Vilevolodon diplomylos both featured anatomy that indicated they were gliders, even outside the skin flap impressions they were found with. They probably didn’t spend much time on the ground at all, as they had very long limbs and fingers. These wouldn’t have been great for outrunning a predator on the ground, but would have allowed these creatures to grasp and possibly hang from branches like bats without much trouble. Both creatures had a decent amount of hair, all of which makes them seem like a good blueprint for our modern gliding mammals.

A key difference between the two species was their diets. Simpler teeth in M. furculiferum indicate that it was a fruit eater, while more ridged crowns found on V. diplomylos‘ teeth point to that animal being a seed eater. The other big difference was their sizes— M. furculiferum was around ten inches long, close to the size of a modern flying squirrel, while V. diplomylos was more of a flying mouse, only growing to three inches in length. We’re not sure if these species were actually contemporaries of each other, but if so, these differences in size and diet would have helped them avoid competing for the exact same resources in the trees.

Not exactly an ancestor

For all of their similarities to modern gliding animals, we’re sure that neither M. furculiferum nor V. diplomylos were ancestors of today’s gliders because neither were actually mammals. The species were eleutherodonts, a parallel offshoot from the family of animals that also includes modern mammals. They were similar to mammals in most ways, with differentiation being noted in tooth formation, among other details. Eleutherodonts and other mammaliforms in the Jurassic and Cretaceous periods actually showed a lot of diversity between species, especially compared to the shrew-like creatures that represent “true” mammals from the same time periods.

For better or for worse, all these specializations, including gliding between trees, didn’t save this lineage from extinction. When the dinosaurs were devastated by the asteroid impact that ended the Mesozoic era, these mammaliforms went extinct too. Eventually, mammals would pick up the gliding lifestyle again, rediscovering it around 50 million years ago.

Source: These Jurassic "squirrels” were the first creatures of their kind to go airborne by Brian Switek, Earth Touch News Network