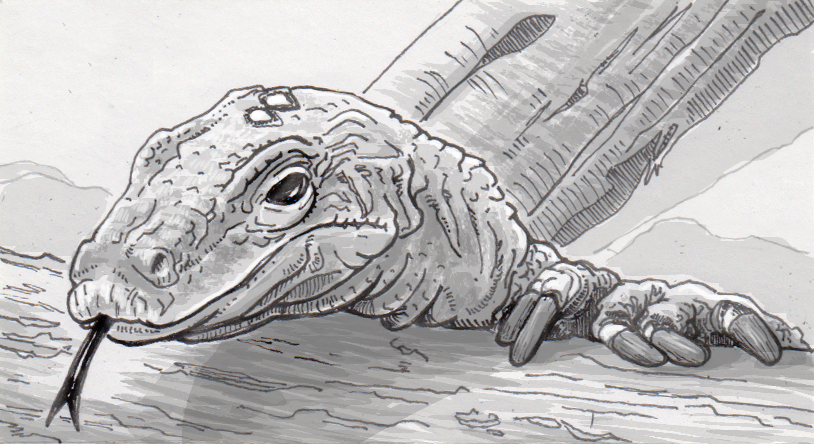 At first glance, the skull of a Saniwa ensidens doesn’t look terribly different than other monitor lizards. Even though this species lived 48 million years ago, it would have closely resembled monitor lizards alive today. A closer look would reveal two important features though— S. ensidens had two tiny holes in its head that were there for its third and fourth eyes. While that sets a record for ocular organs in a jawed vertebrate, the most important part of these extra peepers is how they differed from each other, a fact that may help explain skull-top eyes in animals alive today.

As unfamiliar as it may sound, plenty of vertebrate animals sport a third eye on top of their head (with lampreys also having four.) They’re not eyeballs in the way we’re used to, but are light-sensitive anatomy known as parietal eyes, growing from either the parapineal or pineal glands through the top of an animal’s head. Fishes and frogs generally have pineal organs, while lizards (and lampreys) have parapineal organs. Mammals and birds lack these third eyes, raising questions about how this anatomy ended up in some terrestrial species but not others.

One possible explanation was that lizards had basically kept and modified the extra eye they inherited from fish and amphibians. It’s not clear why mammals and birds would have given this up (hair and feathers in the way?) but this explanation also doesn’t explain why lizards’ parapineal organs closely line up with distant relatives like lampreys. Fortunately, CT scans of S. ensidens were able to capture enough detail in skull anatomy to reveal that this extinct lizard had both the fish and lizard versions of these eyes, clearly demonstrating that the two variations developed in parallel to each other, rather than in succession.

The view from the top of one’s head

There are still some questions about the utility of parietal eyes. The organs are formed when an embryo’s developing brain comes in contact with a patch of skin. That contact triggers a cascade of activity in the affected cells, creating any one of an animal’s three eyes. So far, pineal and parapineal eyes have been linked to endocrine functions (such as circadian rhythm management) and navigation. Some vertebrates seem to be able to detect the polarization of light with their third eye, then use that information to better orient themselves in their local environment.