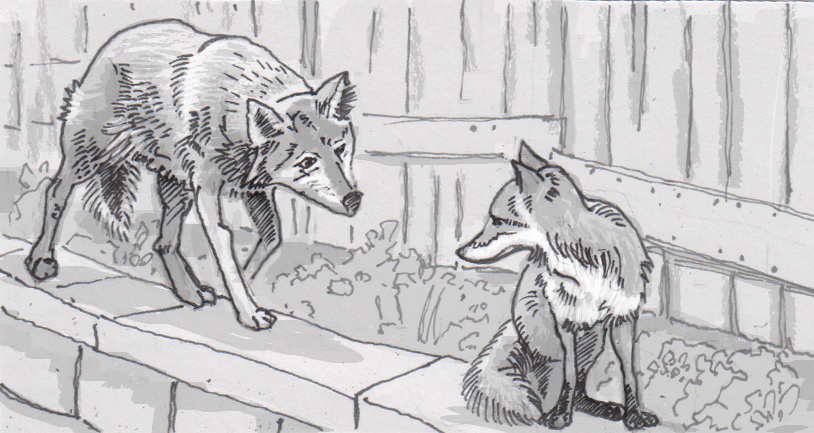 Few animals evolved among the material excess of modern western society. Their bodies, brains and behavior all developed to keep them alive, or at least reproducing, in a world where one’s safety or nutritional needs were never guaranteed. This understandably breeds a bit of wariness about species that might be interested in competing for resources, such as foxes and coyotes, who both head out in the evenings to eat a similar assortment of mice, rabbits and other prey. The fact that the coyotes are big enough to kill a fox should only add tension to the dynamic, but somehow these species are happily coexisting all around the city of Madison, Wisconsin. They seem to have realized that in that environment, there’s enough food, and maybe even space, for everyone.

To understand what these contented canids were up to, researchers from the University of Wisconsin-Madison put radio collars on 11 coyotes (Canis latrans) and 12 red foxes (Vulpes vulpes). After two years, the data was mapped to see how each species was handling living in an urban environment, hopefully helping wildlife managers plan for the animals’ welfare in the future. What they found was a surprising amount of tolerance between two creatures that normally avoid each other in the wild; A fox and coyote were found to be foraging just yards away from each other, with no sign of conflict. For a few weeks, a coyote made visits to a fox den, but the foxes didn’t consider that to be much of a threat, as they never relocated to a new location.

The benefits of boundaries

This doesn’t mean that Madison is some kind of feral canine-commune. The two species may forage for food near each other, but they don’t bed down side-by-side. Coyotes seem to favor natural terrain, living in wooded areas. Even if the foxes wanted some woodland real estate, they probably couldn’t risk challenging their larger cousins directly. With that said, there’s a chance that the foxes don’t mind living closer to human activity, as they’ve been known to make dens in urban areas, such as London, even without pressure from a larger predator.

In areas where the animals have less room to move around, it turns out they can still make things work. While coyotes in Madison’s Arboretum can be exclusive with their territory, packs on the west side of the city are less picky. With less open space in general, they’ve ended up crossing into areas already occupied by foxes, apparently without a problem.

An abundance of food is certainly contributing to the placid relationship between foxes and coyotes, but researchers suspect that the diverse and divided spaces of an urban landscape are helping too. By breaking the land and food sources into block-sized chunks, human activity may have made these animals feel like they aren’t directly competing for the same resources. To find out more about this, the next phase of tracking will involve more human help. Volunteers are being asked to report sightings of foxes and coyotes around Madison, providing a new stream of data on their furry neighbors’ behavior.

Source: Urban foxes and coyotes learn to set aside their differences and coexist by University of Wisconsin-Madison, Phys.org