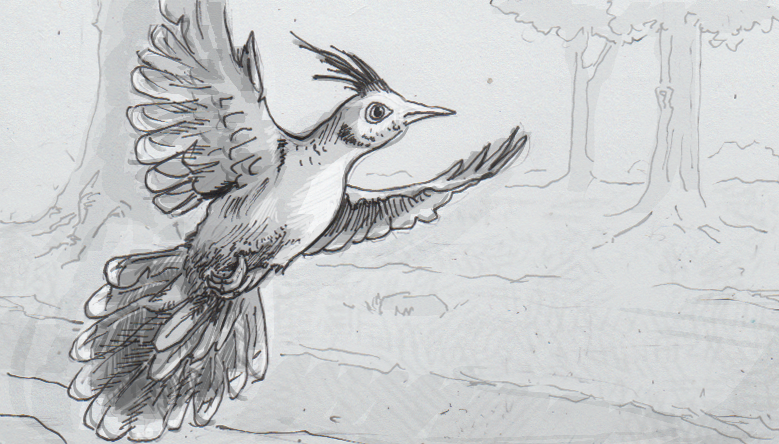 It’s odd, but one of the most unusual traits of the crested pigeon isn’t their awesome little mohawks (although they do have the most punk crest out of their Australian compatriots.) The feature that really caught researchers’ attention was their eighth primary feathers, which are narrower than on most pigeons. Sadly, this doesn’t give the birds any other visual panache, but it does let them signal to each other when it’s time to leave, just by taking flight.

When a crested pigeon (Ocyphaps lophotes) takes off in a hurry, the air pushes through their wing feathers, causing them to vibrate and make a sort of pulsing, whistling sound (see the “Audio” link under Related Stories.) This sound acts as an alarm call to the other birds in the flock, and when they hear it, they’ll also take to the air, as anything that would motivate one bird to leave so quickly must be a threat to all the birds. It may also save the pigeons some effort, as the alarm happens passively, rather than the active vocalizations that most prey birds have to rely on. This doesn’t mean that the birds are jumping at a false alarm every time a member of the flock relocates though, as scientists found there is some subtly to this otherwise automated system.

To see what aspects of these whistling feathers really motivated other pigeons, scientists recorded the sound of casual and urgent takeoffs. When taking off in a hurry, the birds alight at a more severe angle from the ground, which changes the quality of the sound. Truly worried whistles have a more rapid tempo, but researchers wanted to confirm that this shift in rhythm is what other pigeons were listening to. They then played back casual take-offs at varying volume levels, and found that, even when the sounds were loud, they didn’t motivate other pigeons to vacate the area. Alarm whistles, on the other hand, caused mass evacuations 70 percent of the time at normal volumes. Quieter whistles caused less of a reaction, probably because more urgent flapping to avoid a more dire threat would have also created louder whistles. The volume level could basically be used to measure the perceived danger to the pigeons.

A certain level of discretion obviously helps the birds avoid a constant state of panic, living their lives out as a bird version of “The Boy Who Cried Wolf.” Any false alarm would cost the whistle-blower considerable energy for an emergency take-off, and so the birds have fairly good reason to trust when a member of the flock indicates that they’re threatened. As such, the experiments with recorded whistles also found that the pigeons didn’t need to see the source of the alarm, and would react solely to the sound of authentically vibrating feathers.

Source: Sound the alarm – crested pigeons give off warning whistles simply by taking off by Ed Yong, Not Exactly Rocket Science