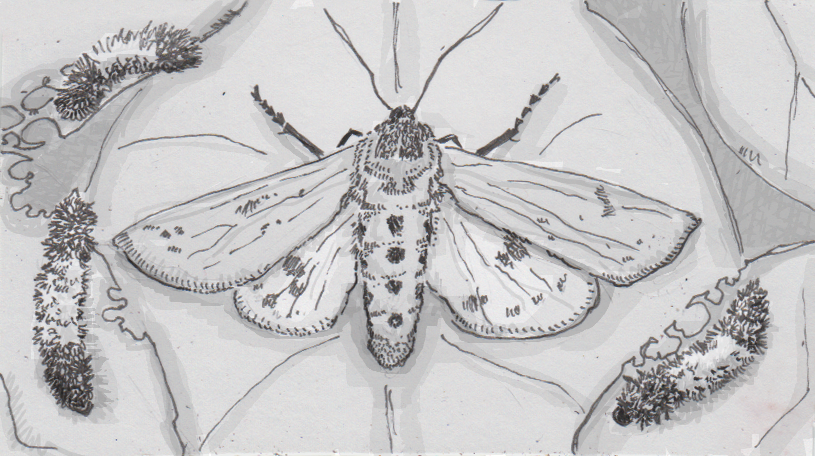 The Isabella tiger moth isn’t nearly as its name might imply. The one- to two-and-a-half inch moth has only the faintest of stripes on its yellow-orange wings, with the clearest markings consisting of a smattering of dark spots here and there. They only live a few days, giving them just enough time to find a mate before they die, putting a quick end to what may have been a life as short as a single summer, or as long as 14 years. This is because the most remarkable thing about these moths is the range of habitats they live in, and the lengths they go to survive their adolescence.

The larval stage of the Isabella tiger moth (Pyrrharctia isabella) is a bit more descriptive and daring its brief time as an adult. The caterpillars, often referred to as banded woolly bear caterpillars, are covered in black and coppery-orange hairs, with the lighter color forming a single band around the insects’ middle. Folklore states that the width of the copper-colored band will predict the severity of the coming winter, with more black hairs indicating a harsher season. In reality, the different colors are the result of a molting process, as the orange hairs take up more and more of the caterpillar’s body as it grows larger. The hairs actually have very little to do with cold or snow, even though the caterpillars are known for surviving winters in the Arctic.

Woolly bear caterpillars in places like Florida or Virginia don’t have to worry much about winter, as they’ll probably find enough food to fatten up and pupate in a single summer. For those caterpillars living further north, spring and summer feels significantly shorter, leaving them with a lot less time and foliage to work with. Instead of giving up on the tundra, woolly bear caterpillars instead enter a form of dormancy called quiescence, hitting the pause button on their life until their world thaws out again months later.

Insects make use of two forms of dormancy. The first is called diapause, which is comparable to hibernation in mammals. It is a form of low metabolic function, and can be cued by environmental or genetic triggers. Importantly, it’s a genetically-determined cycle, and takes a while to recover from once the correct conditions are satisfied.

The second form of dormancy is quiescence, which may appear very similar to diapause at first. The key for the woolly bear is that it’s not on an internal clock, and is more responsive to environmental conditions. This allows the caterpillar to hide out under leaf litter for the Arctic winter, resuming activity the moment things are warm enough to resume foraging. Minimal metabolic functions are less likely to be damaged by freezing temperatures, which the caterpillars back up with a cryoprotectant that keeps their circulatory system from being damaged by ice crystal formation.

By safely freezing through winters, Arctic woolly bears can slowly eat their way through as many as 14 summers. Once sated enough to build a cocoon, they still only have a few days to find a mate as a tiger moth, with no way to hit the pause button again if the singles’ scene doesn’t work out. It seems that even after surviving being frozen solid, you only get so many chances to get things right.

Source: The Woolly Bear Caterpillar in Winter by Karen McDonald, The Infinite Spider