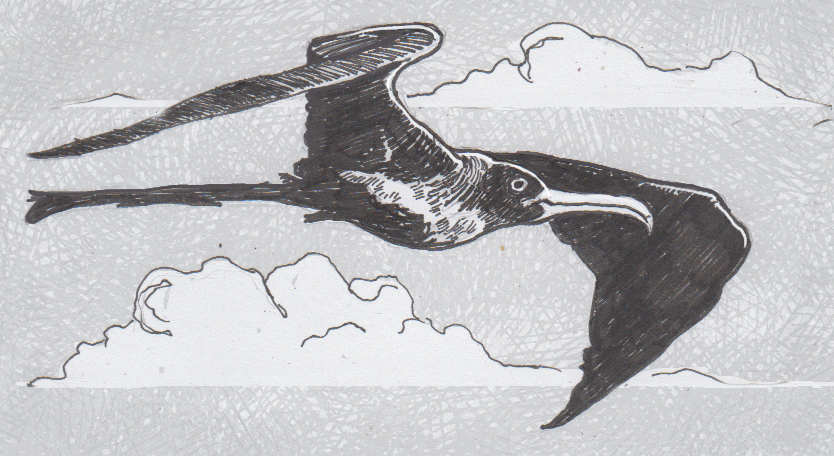 Plenty of fiction, from Greek mythology to Super Mario Brothers, has touched on the idea of riding on a cloud. Anyone’s who has flown through a cloud in an airplane has seen that there’s not much in a cloud to actually rest on, but seagoing frigatebirds do the next closest thing, using clouds as mid-air rest stops over the oceans. This works so well, frigatebirds are able to journey out over the ocean for weeks at a time without getting wet. Which is good, because if they actually did have to land in the water they’d probably drown.

When great frigatebirds (Fregata minor) do head to puffy cumulus clouds to use as rest stops, they’re really targeting the warm updrafts that help shape these clouds. The birds have six-foot wingspans but don’t weigh much, giving them the highest ratio of wing surface area to mass of any bird. This lets them float on updrafts with next to now effort— in one case, a tracked bird was observed flying 40 miles without flapping their wings once. It also allows them to easily reach altitudes as high as 12,000 feet, staying in the air for as long as two months at a time. As fun as it is to set flight records, the birds are actually staying up over the ocean in order to eat seafood while staying as dry as possible.

In addition to these records for high-altitude, high-efficiency flight, frigatebirds also stand out for being the only seabird without waterproofing on their feathers. This is tough, because they want to eat fish, but can’t risk really diving for them like other birds do, since they’d become to waterlogged to fly away again. Instead, they let those ‘other’ birds to the work for them, harassing more able fishing birds until they regurgitate some seafood, which the frigatebirds then snatch up. When that isn’t an option, the frigatebirds’ favorite cloud-building updrafts come into play again, as those conditions also tend to disrupt ocean currents in a way that attracts phytoplankton and then bundles of small fish, and then big fish. The frigatebirds then skim the surface of the water to grab small fish jumping to escape being eaten by underwater predators.

Once they’re done filling up, it’s back to the clouds to basically wait on the wing until the next meal presents itself, either in two days or maybe two weeks. It’s all the same if you’re able to rest on the air itself.

Source: Nonstop Flight: How The Frigatebird Can Soar For Weeks Without Stopping by Christopher Joyce, the two-way