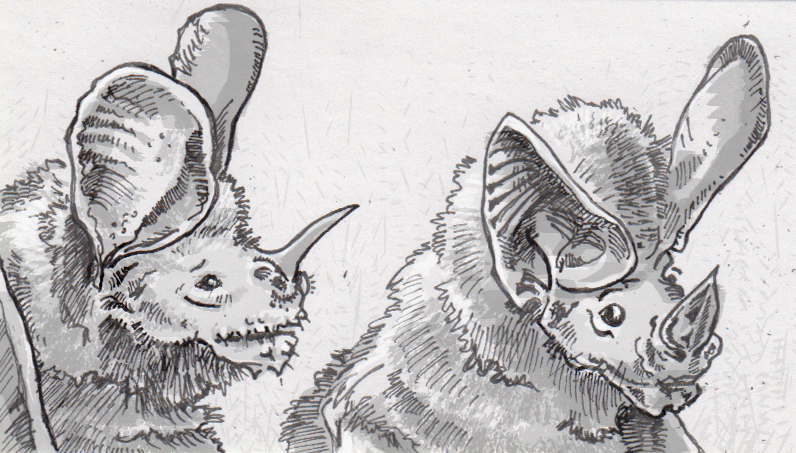 “I’ll have what she’s having.”

In the context of a restaurant, choosing one’s food based off the example of your fellow diners doesn’t seem like a big deal. You have a chance to see food you might not be familiar with, plus see how much other diners are enjoying their orders. We probably wouldn’t trust an endorsement from another species though, particularly those with different dietary standards than our own. From this perspective, it’s remarkable that the fringe-lipped bat not only follows the meal suggestions of other bat species, but it learns to mimic their hunting in next to no time at all.

It certainly doesn’t hurt that the fringe-lipped bat (Trachops cirrhosus) has a versatile palate from the start. They’re known to switch up their dietary staples depending on what’s seasonally available, munching on frogs in the rainy season and bugs like katydids when it’s dry. They’re even happy to switch up their hunting techniques depending on the situation, sometimes using echolocation while other times relying on passive observation of the sounds in their environment. If that didn’t give them enough options, they’ve also been found to follow the lead of their fellow fringe-lipped bats, learning to hunt prey a peer had been trained to catch.

Now the fringe-lipped bats’ observation skills have passed another test, as the bats are also able to learn from the experiences of other species. A white-throated round-eared bat (Lophostoma silvicolum) was first trained to associate an artificial tone with the appearance of a tasty katydid. Once the round-eared bat was reliably responsive to a sound that was apparently rather irritating to humans and bats alike, those bats were placed in an enclosure with a novice fringe-lipped bat. The tone was played for both bats, and as expected, only the round-eared bat knew it was a cue concerning an upcoming meal.

The fringe-lipped bat didn’t take long to catch on though. When left without a trained tutor, the bats never suspected that the artificial beeping had anything to do with a possible meal. However, after 20 to 30 demonstrations by a round-eared bat, the fringe-lipped bats clearly learned what the sound meant, and could start hunting katydids themselves.

Advantage in the ecosystem

The bats’ observational skills aren’t the first time one species has learned from another, but the brief training period is impressive. Researchers believe that is should be considered in conservation efforts, since it shows how no species exists in vacuum, and that fringe-lipped bats in particular may start preying on other species’ favorite foods if they can’t find their own. If this kind of behavior can be found in other species, it may help explain some of the success of bats as a whole, as they account for a huge percentage of the worlds’ mammal species.

Source: Bats learn about food from other species by Dana Kobilinsky, The Wildlife Society