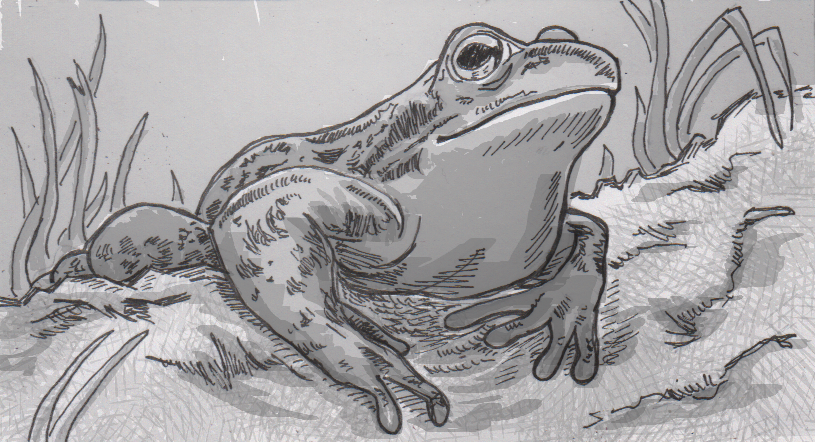 It may not be easy being green, but frogs, toads and other amphibians may have a a very easy time seeing green. Biologists have have noticed unusual properties in the light-sensing cells in amphibian eyeballs as far back as 1877, but it’s been unclear exactly what difference that made in the animals’ lives. With an accumulation of data on both anatomy and behavior in the intervening centuries, scientists from Lund University have some new answers about frogs’ and toads’ unusual eyes. Through a series of experiments, it seems that these amphibians are able to not only see, but discriminate between colors in nearly perfect darkness.

Frog, toad and even human eyes depend on two types of light-sensing cells to take in visual information. Cone cells pick up light for specific colors, and rod cells are tuned to values of light and darkness. In low light conditions, such as under moonlight, cone cells can’t really keep up, and our vision defaults to a desaturated, nearly grayscale world as seen by our rod cells. The collective group of anurans (frogs and toads,) as well as a few salamanders and newts, have specialized rod cells though, which seemed to have special sensitivity to green or blue portions of the light spectrum. However, knowing what the anatomy was capable of didn’t prove that these animals actually made use of these cells in that capacity, and so a series of tests was required to see if the frogs were as appreciative of their ability as researchers were.

The first test hinged on the idea that toads like Bufo gargarizans had previously shown a preference for bluer mates, and were willing to demonstrate this preference in a lab setting. Males were given the option of different potential mates in varying lighting conditions to see if they could remain true to their blue preferences in relative darkness. It would seem like mate selection would be important enough to make the right choice, but as the lighting got worse, the toads apparently couldn’t see the difference too well, accidentally lowering their standards up to a point. When things were too dark, the toads actually refused to select any mate at all.

The second test looked at food preferences, with frogs and toads being placed in a simple Y-shaped maze, with each path leading to a different bit of fake food. The “flying insect” they could see was fake so that its coloration could be controlled as either blue or green, although real meal worms were made available if the test subject chose the greener option. Anurans had been previously proven to be trainable in such a test, and so now the promise of meal worms was used as motivation to pick pay attention for green as a cue.

The toads seemed to understand the program rather quickly, and showed some preference for green bait. Even with low-light conditions, members of Bufo bufo could pick “correctly.” The Rana temporaria frogs were much more confusing, not even picking a preference in brighter light. Eventually, researchers realized that the frogs were aiming for the darkest bait, no matter the color. Once that was understood, it was at least clear that the frogs were consistent in this preference in just about any light condition.

Leap to the light

If the first trials weren’t terribly conclusive, the final test finally let the anuran’s low-light abilities shine. Each animal was placed in a black bucket, with a lid on top. That lid had windows that would allow either blue or green light to enter the bucket once a light source was placed above it. As found in previous experiments, the frogs were expected to move towards bluer light, presumably as they would move towards the sky to exit a hole they needed to escape from in the wild.

As light levels changed, the frogs complicated things slightly. In very low light, they moved towards green light, and then in brighter conditions switched to blue. Researchers suspect that the frogs are not only discriminating between colors, but demonstrating how they would be useful in the wild (since bugs and mates apparently don’t matter as much.) At night, most ambient light is more likely to be on the red to green end of the color spectrum, so the frogs were responding appropriately to what they maybe thought was a night sky. Brighter conditions made more sense as a daytime sky, which the frogs responded to as the light increased.

Even if this isn’t the true motivation behind this behavior, researchers did find that the frogs were making these choices with incredibly tiny amounts of light hitting their eyes. They were picking up green and blue at the “absolute threshold of the visual system,” in near total darkness. So earlier hypothesis about amphibian eyes were basically correct, but with the caveat that these animals seem to rely on this ability only in very specific circumstances.