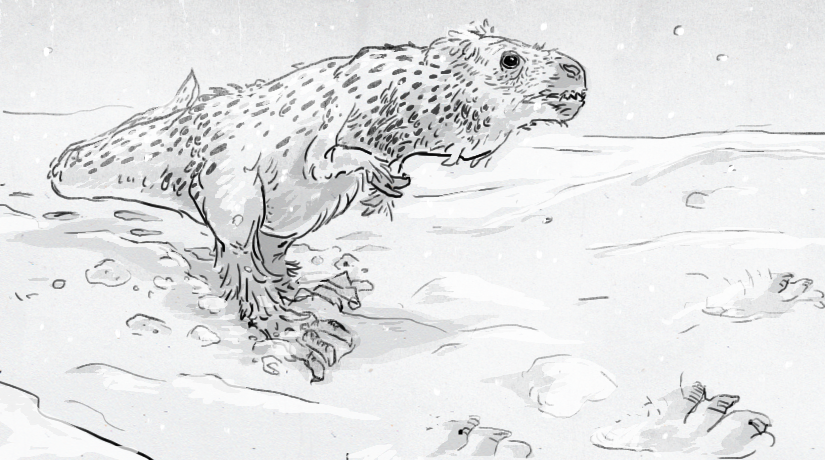 Frosty fauna of the ancient Arctic

Before the North pole was associated with polar bears and reindeer, it was home to an odd menagerie of dinosaurs and other prehistoric life. While we generally think of the Mesozoic era as being hot and humid, the North Pole still had cold winters thanks to the our titled axis reducing the Northern Hemisphere’s exposure to the Sun each year. So while the weather wasn’t a perfect proxy for what you see in Alaska and Canada today, it was still enough of a winter wonderland to demand special adaptations from the plants and animals that lived there.

Many of the species that have been found closer to the North Pole appear to be offshoots of their more famous, southern cousins. Rather than completely unique families of animals, there are ceratopsians, tyrannosaurs, and hadrosaurs, albeit with a bit of an Arctic twist to them. These adaptations to the cold sometimes aren’t always dramatic, and may have simply arisen thanks to the geographical isolation created by surviving through harsher weather that may have made certain terrain inaccessible during certain seasons. The contrasting seasons may have also mean that this dinosaurs migrated on an annual basis, as even a warm-blooded, feather-insulated dinosaur could have only withstood a polar winter for so long.

In the case of the region’s premier predator, Nanuqsaurus hoglundi, the cold may have forced some downsizing. In many ways, this tyrannosaur resembled its relatives from warmer climates, with small forelimbs, strong jaws and formidable teeth. However, a 40-foot-long predator like Tyrannosaurus rex would have needed a lot of food all year long, which would have likely been a tall order for N. hoglundi. To compensate for its more limited menu, N. hoglundi just didn’t grow as large, topping out around 19 feet long. While this is still larger than anything you’d find walking around the North Pole today, it was small enough that the tyrannosaur is referred to as a ‘pygmy’ species, and possibly hunted in packs to be effective against some of the larger prey available in the area.

The top herbivores saw some downsizing, but not much. Hadrosaurs found in Alaska weren’t breaking any records, being neither the largest or smallest species discovered. The premier ceratopsian wasn’t especially small, growing up to 26 feet long, but had some interesting reductions of the order’s famous horns. Rather than sporting the spikes of famous cousins like Triceratops, Pachyrhinosaurus had a blunted nose feature, called a boss, and a few twisted horns along its frill. Its four-ton bulk may have been all the protection it needed, at least once it reached maturity and became too big for the region’s predators to safely attack.

As more exploration is conducted in Alaska and Canada, it’s becoming clear that the Mesozoic Arctic was a more diverse place than expected, even with the cold weather. Omnivorous Troodons, aquatic Tylosaurs, and various other theropod species have all been found, but often only in fragmentary samples, which frustrates efforts to fully understand the northern ecosystem. Even plant samples are hard to come by, limited only to fossils of vines and a shrub, despite pollen evidence that norther summers were also filled with flowering plants by the Cretaceous period.