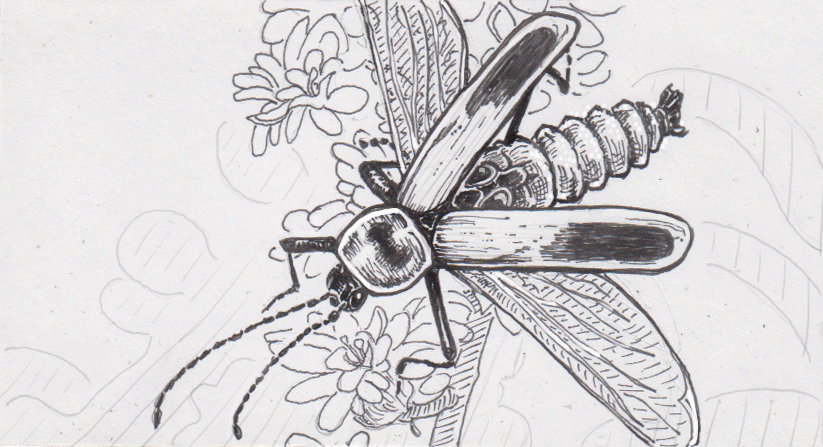 This should be obvious, but don’t try to mate with zombies. Even “sexy” zombies doing their best to convince you they’d really like to have kids. You will have no offspring, zombified or otherwise, because the only organism that’s going to be reproducing is the fungus that turned your supposed mate into a zombie in the first place.

As outlandish as the above advice may sound, it’s a real concern for Goldenrod soldier beetles (Chauliognathus pensylvanicus). The beetles live in meadows across North America, eating flowers as their main source of food. Conveniently, they also mate on flowers, since it’s a good place to run into another beetle. Amorous females can advertise their intentions by waiting on a flower with their wings open and extended, almost like they’re about to fly away. Unfortunately for the beetles, spores for the Eryniopsis lampyridarum fungus can also be found on these flowers, which is what kicks off a cycle of zombification and unintentional necrophilia.

When the fungus infects a beetle, it triggers some very specific physiological responses to bend the beetle’s body to it’s own ends. The beetle will be compelled to climb to a flower top as it’s body starts to give out. Once in position, the fungus ensures that its host doesn’t just fall off the flower once it’s dead, by forcing it to clamp onto the flower tightly with it’s mandibles. The corpse is just a means to an end though, which is where the beetles’ courtship behavior comes into play.

An inert beetle clamped to a flower isn’t attractive on it’s own, but the fungus makes sure to pretty up its host, whether its male or female. After 15 to 22 hours, the wings will pop out to resemble the pose of a female looking to attract a mate. As an extra touch, the fungus causes the beetle’s abdomen to swell, which is an attractive look to male beetles that seem to prefer larger females in general. This attempt at sexiness doesn’t make zombified males all that enticing, but zombified females do draw a lot of attention from healthy males in the area. The resulting contact with those males is the fungus’ real goal, because that’s how new spores get spread from a zombie female to new flowers across the meadow.

This isn’t the only insect to have it’s brain and body taken over by a fungus, but there are still some questions particular to this pairing. Since the fungus already manipulates the beetles’ behavior, scientists are going to take the opportunity to measure exactly how big a role opened wings plays in courtship by gluing zombified wings shut. The zombie won’t object, and better yet, won’t do anything new that would add unwanted variables to the study.