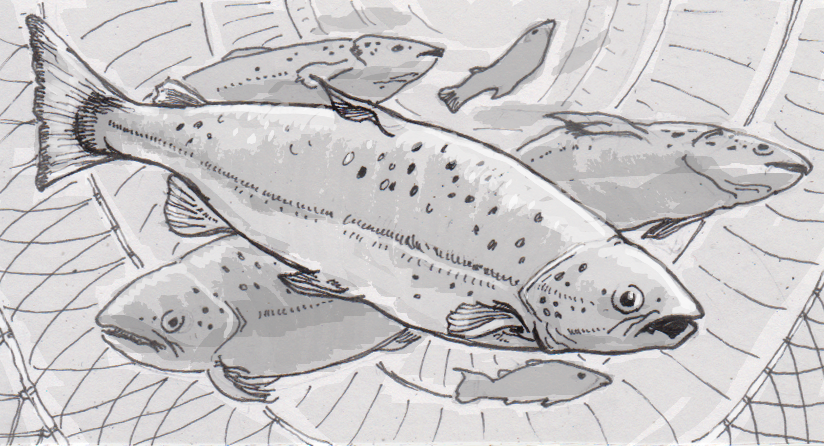 The future of upcycled surplus food starts with salmon, sushi and smoke

How delicious does “recycled” food sound to you? If that sounds too much like coprophagia to you, maybe you’d prefer to snack on “rescued” produce? Or, like most folks in a study from Drexel Univeristy, you might give some “upcycled” food a chance, even if you do it to benefit society, more than your taste buds. However it ends up being packaged, the world is sure to see more value-added surplus food in the future, hopefully making a dent in the 80 billion pounds of food thrown away in the United States annually. While we still have to wait for our chance at upcycled granola bars, farmed fish are getting a taste of second-hand food right now.

Unlike humans, fish aren’t throwing out billions of pounds of perfectly healthy food because it doesn’t look pretty, was too big a portion, etc. Captive fish do, however, eat a lot of processed meal and pellets, which can be produced so inefficiently it can take 20 pounds of raw fish to bulk up a bluefin tuna by a single pound. Salmon are a bit more efficient to feed, but they’re still being fed fish that could just as easily feed people directly, basically making your dinner use more energy and resources than it should.

Since the fish are already being fed processed pellets instead of fresh prey, various efforts are underway to make those pellets from second-hand energy sources that wouldn’t otherwise be eaten. In Westfield, New York, this strategy has paired the Five & 20 Spirits and Brewing company with TimberFish Technologies. Instead of paying to simply dispose of the used grains and wastewater, the brewery is turning it into compost to feed microbes and invertebrates that then get fed to fish. To complete the loop, the brewery plans to add that same fish to their menu, allowing diners to drink and eat a beer-based meal. Along similar lines, other fisheries are picking up algae and discarded nut and flax seed waste from farms, upcycling components that would otherwise go to waste.

A new twist on smoked salmon

Most ambitiously, a startup called NovoNutrients is looking to upcycle air pollution into fish food. The company hopes to install equipment on industrial smokestacks to filter and capture carbon dioxide, then feed that to microbes that would produce protein for fish feed. It’s not quite the same loop as feeding fish worms fed on human food waste, but covering 20 percent of a fish’s protein needs while scrubbing air pollution still seems worthy of the “upcycling,” “rescaled” or “reclaimed” monikers.

Source: Waste Not, Want Not: Drink Beer To Feed Fish And Help Save The Planet by Alastair Bland, The Salt