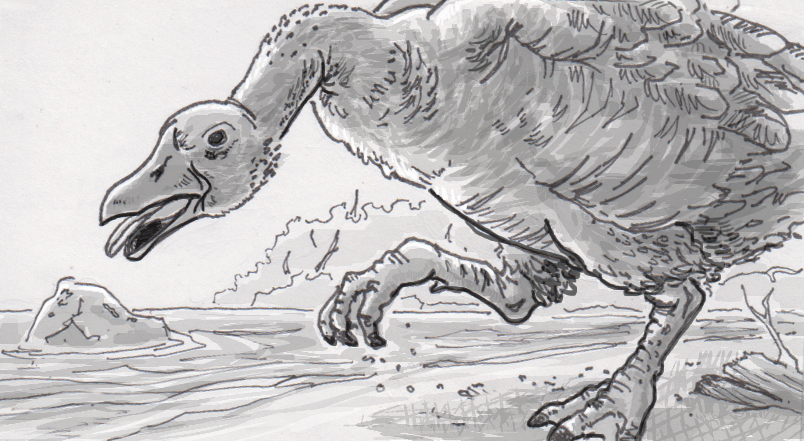 Garganornis ballmanni, an extinct waterfowl with wings suited for fighting, not flying

As cool as it must be to soar through the sky, history has plenty of examples of birds who gave up flight altogether. Even ignoring extremes like a hummingbird’s 70 wing-beats per second, getting a body off the ground requires a lot of specialized muscles and the energy to use them. For all the ways that flying seems like it might be fun or useful, researchers are finding that avoiding predators is the biggest motivation to continue leaving the ground. If a species finds itself where that mobility isn’t necessary, it can free up those resources for other pursuits, like beating rivals around the head with their wings.

Six to nine million years ago, Garganornis ballmanni lived on islands in the Mediterranean Sea. It resembled a goose, but dwarfed all but the largest modern relatives, standing around five feet tall and weighing 48 pounds. With no predators to worry about, the massive bird probably behaved more like a terror bird than today’s bread-nibbling waterfowl, free to stomp through island forests as it saw fit. The only check on these big birds were other members of G. ballmanni, all of whom were armed with shorter wings outfitted with carpal knobs- hardened knobs of skin often used in bird-on-bird skirmishes.

Aside from the carpal knobs, the overall proportions of G. ballmanni support the idea that these animals ancestors traded flying for fighting. The overall weight of the bird may seem like the key giveaway, but weight alone doesn’t determine if an animal can fly— even a 550-pound Hatzegopteryx thambema was still able to fly. The real clue here was G. ballmanni‘s proportions, as large legs and shorter wings have been found to be the best skeletal clues for determining which birds could fly, and which couldn’t.

A separate study of waterfowl looked at those proportions very closely to ensure that this model made sense. G. ballmanni isn’t the first waterfowl to have abandoned flight, and so 103 modern species were carefully measured to see which anatomy best predicted being grounded. The wing and leg bones were the stand out features, correctly predicting which species can and can’t fly. From there, the experiment was expanded to check some other extinct species, finding that five out of 16 extinct ducks and geese were likely to be flightless as well.

With these models, and further examples like G. ballmanni‘s weaponized wings, researchers have more tools to figure out what these extinct birds’ lives were like. In the case of G. ballmanni, being flightless on an island helps fills in some gaps about the pressures of their world— being grounded probably meant the big birds were pitted against each other hold territory, all in order to have access to fresh water on their island getaway.