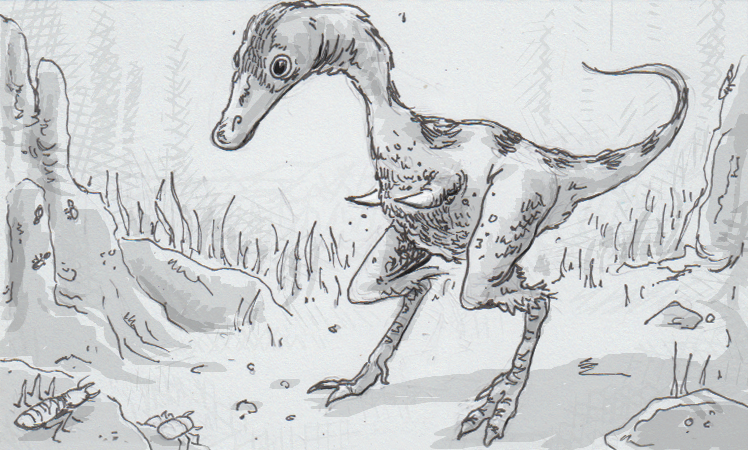 Gauging dinosaur ferocity by their claws and fingers

My hands can do a lot. Grasping, poking, flicking, and touching are just a few of the many things our primate ancestors set us up with, and yet raking and slashing don’t really make the list. Humans are very “hand-oriented,” and yet our hands are usually weaponized as blunt fists, since we somehow failed to end up with awesome, intimidating claws or spikes. Once you start looking through other bipedal creatures though, you’ll see that we may not have been unfairly passed over— big, clawed hands might not be as cool and more importantly, useful as our imaginations would like them to be.

The largest clawed hands we know of where on the Cretaceous dinosaur, Therizinosaurus cheloniformis. This species are only known from two clawed arms, but with three-foot-long finger-scythes, the fossils make quite an impression. The animal itself is estimated to have been 33 feet from nose to tail, so these eight-foot arms and claws were a large, prominent feature in its anatomy. However, based on other Therizinosaurs‘ skulls, these creatures were herbivores, and so these claws were probably not intended to be aggressively slashing foes like some sort of prehistoric Wolverine. Instead, those claws may have been part of a much more passive lifestyle, sitting like a giant sloth, raking leaves off of trees. The biggest claws ever were likely gardening tools, not weapons.

Looking at a more decidedly predatory creature, Tyrannosaurus has famously small arms compared to the rest of its bulky body. At around three feet long, the forelimbs on these large theropods seem to be comically proportioned to their overall body. They were muscled, but with limited reach and range of motion, they probably weren’t used for much reaching or even feeding, since they couldn’t reach the animal’s giant mouth (even Allosuarus‘ longer proportions couldn’t enable feeding itself food.) The mouths do provide some answers about these arms though, because their reduced musculature made room for bigger neck muscles to attach to the chest and shoulders. So it’s possible that T. rex’s small arms were a way to go all in on their real weapon— their powerful mouth.

Tiny arms don’t guarantee a big bite though. Some of the smallest nubs on any theropod may have been on a group of dinosaurs called Alvarezsaurs. These small, light-weight creatures were generally no more than six-feet-long, with small heads that were clearly not built for anything like a T. rex’s crushing bite. Their arms are their stand-out feature, although strictly in the figurative sense. These dinosaurs sported tiny, nub-like arms with next to no hand to speak of. Linhenykus monodactylus only had one finger claw that was just long enough to extend beyond the animal’s chest. Compared to even a T. rex, the single claw looks a bit like the last step before evolution finally drops a vestigial structure no longer needed for the species survival, but a closer look indicates that these claws were likely very useful.

The small theropods also had strong chests, shoulders and backs, and so the best guess is that these claws were used to dig at ant or termite mounds, exposing food for the insectivore to eat. The claws were likely capable of a relatively strong downward swiping motion, and have been compared to the claws on modern pygmy anteaters. So despite their nearly ornamental appearance, these tiny clawed hands are actually the most closely tied to predatory activity in this list of theropods. I think I’ll stick to my soft little fingers for now.