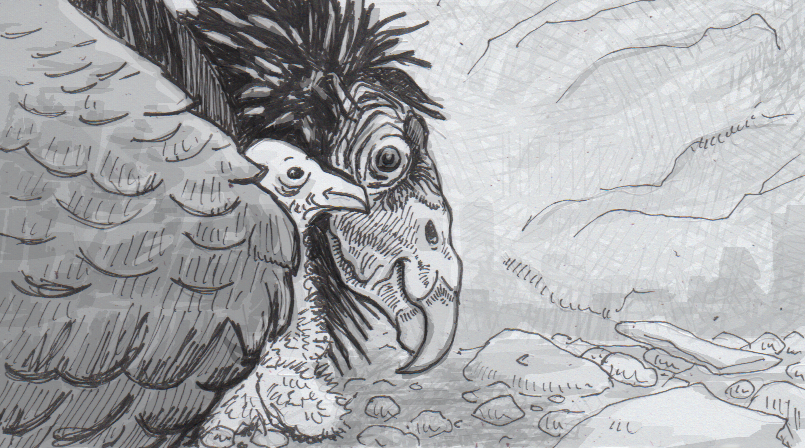 In 1982, when confronted with the fact that California condors had been reduced to 22 individual birds, many people’s first response was to try and shrug off responsibility for the species’ survival. Noting that populations of the large vultures had been declining for as long as anyone was keeping track of them, it was suggested that human intervention would be wasted, and that we “should allow nature to take its course.” (An argument that interestingly doesn’t seem to come up as often when discussing the plight of say, real estate…) These attitudes haven’t prevailed, but only recently have we really been able to trace the story of these scavengers since things first started going downhill 14,000 years ago.

While humans arrived in the Americas towards the end of the Pleistocene age, they understandably didn’t immediately start keeping records on California condor (Gymnogyps californianus) populations. For data on that time, scientists look at paleontological evidence like skeletons and eggshells. These indicate California condors once had a much larger range across North America, turning up from Canada to Mexico, California to New York. As nice as their alliterative names are, in better days they probably should have been called North American condors.

However, as the ecosystem of 14,000 years ago changed, the condors’ range began to shrink. Many large mammals like mammoths and giant sloths went extinct, possibly thanks to a combination of disease and human hunting. By the time of the California Gold Rush, the condors were declining faster and faster, with new pressures like egg collectors, habitat loss and ranchers and farmers that actively hunted the birds. By 1982, the remaining 22 birds were captured to begin a captive breeding program in hopes of rescuing the species from extinction.

To help figure out how much hope there is for the species, new research into condor DNA has been trying to calculate how genetically diverse they were before the breeding program. If “nature’s course” really was putting California condors on a natural road to extinction, their genes would show less and less diversity in mitochondrial DNA. This would help identify just how many sub-populations there were in the past, and how much they interbred with each other. We know that the condors alive today are in a bit of a genetic bottleneck thanks to their 14 common ancestors from the 1980s, but knowing how long such a problem had persisted would help fill in gaps about the birds’ long-term viability.

To sample older, deceased birds, researchers carefully combed through preserved museum specimens, eventually coming up with 93 samples. Analysis revealed a significant number of sub-populations, with no real signs of decline until the 1800s when friction with humans began to increase. If California condors where headed towards extinction, the timing of their destruction indicates that humans, not nature, had put them on that course. Which means that changes in human activity to help the birds should stand a better chance at success.

Today there 435 California condors, all thanks to the California Condor Recovery Program. The vultures still face a number of threats caused by humans, like habitat loss and lead poisoning from hunters using cheap buckshot that the birds eat when scavenging. Fortunately, both are things people can help control. Thanks to this study, we have reason to believe that measures that help reduce unnecessary deaths, like switching to non-lead pellets when hunting, are worth doing because the condors aren’t inherently flawed on their own. This work has also suggested new possible ranges to release birds to as the program continues. California condors probably won’t be flying to New York again any time soon, but it seems that it’s been worth the trouble to restore a species we almost eliminated.

Source: California Condors Have Been Endangered Since Humans Arrived In America by GrrlScientist, Forbes