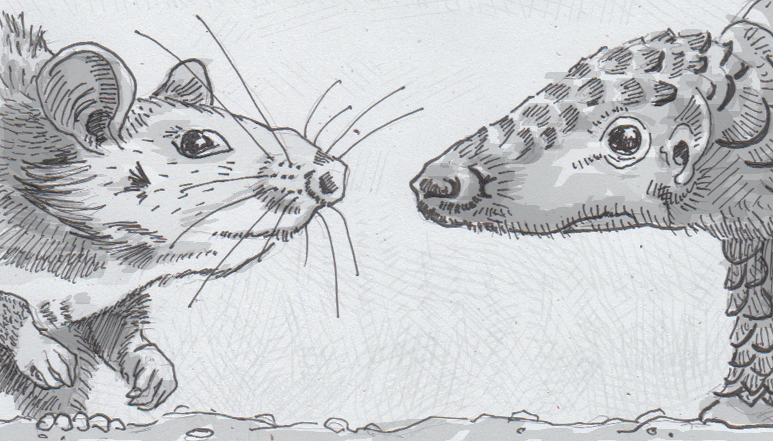 As if the world did already have enough to thank African giant pouched rats for, the three-foot-long rodents are about to start saving endangered pangolins. The rats don’t necessarily have a strong affinity for the scaled, insectivorous mammals, but their incredibly sensitive sense of smell gives them the ability to sniff out pangolins illegally hidden in shipping containers, hopefully before they get sent off to be eaten and have their scales ground up for folk-medicine. For the rats, it’s just an interesting way to spend the day, plus earn some banana treats.

Giant pouched rats, also known as Gambian pouched rats (Cricetomys gambianus), are named for the pouches in their cheeks that let them carry food around, a bit like hamsters. While that was an eye-catching feature when humans first named the critters, we’re now more interested in their noses. With poor eyesight, the giant pouched rats have to rely on their very sensitive sense of smell to navigate the world around them, and can detect tiny traces of scents as well as any dog or even many electronic sensors.

Since the rats are also intelligent enough to train, humans have started leveraging this sensitivity to have the rats sniff out a variety of hazards in different settings. In medical clinics, giant pouched rats have been trained to respond to the smell of Mycobacterium tuberculosis in samples of patients’ saliva or urine. Out in the field, other batches of giant rats have been trained to sniff tiny traces of TNT from buried land mines. The rats are light enough to safely walk over mines, and can search an area faster than a human with a metal detector can, covering 650 square feet a day.

As with the other detection projects, pangolin-sniffing rats are trained from when they are around four weeks old. They’re challenged with a variety of smells, from coffee to oil, but are only rewarded when they respond to the items they’re searching for, like pangolin skin or scales. Once the project is off the ground, leashed rats will be used to patrol ports and warehouses, hopefully helping to slow the trade of pangolins, which are currently the most frequently seized mammal in the world, despite their threatened populations in Africa.