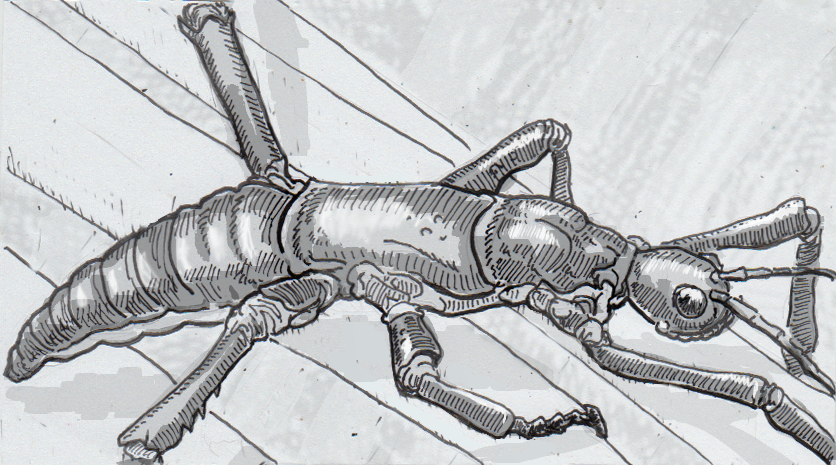 Lord Howe Island stick insects, also known as tree lobsters, are some of the biggest bugs on Earth. Measuring up to six inches in length and weighing .88 ounces, they seem like fairly formidable critters at first glance. However, they fall more on the “gentle giants” side of things, eating plants with mouths that couldn’t bite a human if they tried. This is part why they were basically run out of their native Lord Howe Island in 1920, presumed extinct thanks to a wave of invasive rats debarking from a beached supply ship. Fortunately, a small batch of tree lobsters were resilient enough to hold out on a nearby crag of rock until 2001, when four of them were discovered and brought back to the Australian mainland.

Once in Melbourne, one breeding pair was given to an insect breeder while the other stayed at the zoo. Within weeks, the breeder’s couple died, adding extra pressure to the remaining “Adam” and “Eve” tree lobster. After a few close calls, plus another visit to the rocky island where they were found in 2003, a new brood of the stick insects was established in the Melbourne zoo— so many that they started wondering what to do next in the rehabilitation of this species.

In the short term, entomologists were concerned about holding all their bug eggs in one basket. Despite having built up a stable population at the zoo, there is still concern that a disaster, such as an uncontrolled outbreak of disease, could wipe them out and leave the species hanging by a thread once again. With that in mind, 300 eggs and clippings of tree lobsters’ favorite plants have been sent to the San Diego Zoo in California. The eggs have been hatching, mainly in the wee hours of the morning, giving hope to the success of a second colony.

In the long run, the obvious goal would be to return the tree lobsters to their native Lord Howe Island. This would require eradicating the rat population that still lives on the island after that initial invasion. The rats aren’t too popular with the humans now living there, but people aren’t dying to have a healthy population of large insects around either. To boost the bugs’ public image, it’s been pointed out that in addition to being harmless, they have a certain charm to them as well. The males and females seem to pair off at night when sleeping, nearly to the point of snuggling, as the male tree lobsters will often wrap three of his legs around his bunkmate for the night. It’s not clear if this is actually motivated by affection, but if it helps them reclaim their home from rats, it seems like a nice story to tell.

Source: Love Giant Insects? Meet The Tree Lobster, Back From The Brink by Nell Greenfieldboyce, The two-way