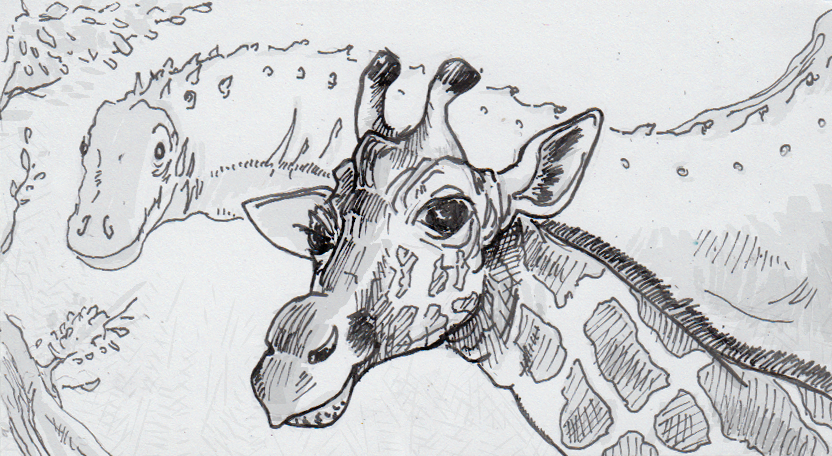 Giraffes, apatosaurs and the many ways to stick one’s neck out

It’s easy to explain a lot of evolution though mouths. The need for food is obviously very motivating, and if an animal can’t eat it’s not going to live very long, much less long enough to reproduce and propagate its genes. Of course, it’s also possible to draw too narrow a focus when looking for the underlying pressures that shaped organisms on our planet, missing that the same creature with interesting eating habits has also gained other abilities though evolution. Things like whacking their peers to impress girls, for instance.

Tall for more than just trees

An obvious example of this blending of purposes is the giraffe (Giraffa camelopardalis.) One look at these 20-foot-tall animals and it’s hard to see their body as anything but a mouth on stilts, designed to reach the highest leaves available on the savanna. Their enormous legs and necks have required a slew of unusual adaptations, from blood pressure control to keep circulation normalized in their brains to extra-length laryngeal nerves. However, they’re actually so tall they tower above any other animal that could compete for the same food by six feet. There’s some incentive to be as tall as possible, with the leaves at the top of the tree generally being more nutritious than lower leaves, but that’s a lot of height to account for.

A complimentary pressure may have been sexual selection. Male giraffes will fight for territory and mating rights by swinging their heads at rivals’ necks, almost like a cudgel. With such large, developed necks, it could almost be considered efficient to use existing anatomy this way. Generally, the larger male will win these non-lethal brawls, and females seem to favor males with larger necks. This doesn’t prove that this is what started giraffes on the road to longer vertebrae, but it would definitely help accelerate that development.

Of course giraffes aren’t the first herbivore to have evolved super long necks, as sauropods like Apatosaurus louisae famously had necks close to 40 feet in length. While most sauropod evolution seemed to have trended towards lighter neck construction over time, apatosaurs seem to have actually bulked their necks up. Cervical vertebrae have been found to be very robust, housing critical anatomy like the trachea and esophagus safely between thick ribs of bone. The bulk and shape of these bones possibly projected slightly through outer layers of muscle, suggesting a much more armored approach to neck construction. The trapezoidal shape of each vertebrae lends itself to downward chopping motions, which has raised the idea that these dinosaurs were also using their long necks as weapons.

So are long-necks weapons or feeding tubes? Probably a bit of both. While most humans think of a neck as something one needs to protect, rather than swing around at a rival, sexual selection can do strange things to body once it gets going (just ask a peacock.) As long as these necks can still access food, it seems evolution has no problem tacking on new features along the way.