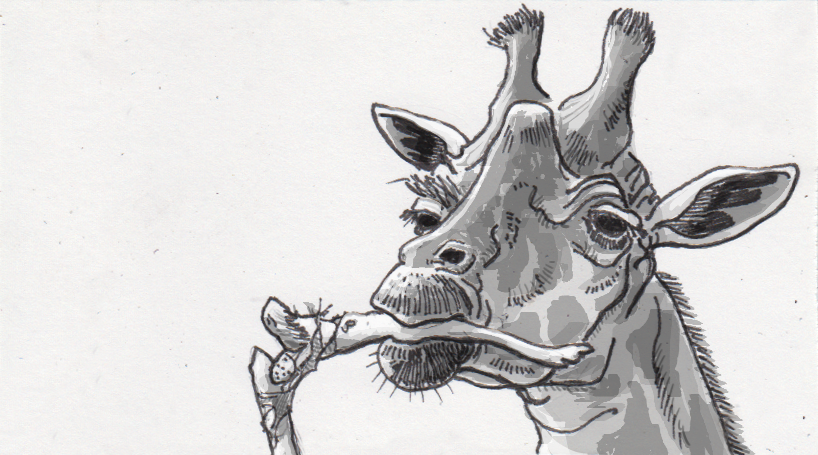 Giraffes suck up missing minerals by snacking on skeletons

At the grocery store, dietary supplements are likely to be powders, pills or maybe vitamin-soaked gummie bears. On the savanna, animals can pad their diets with slightly more alarming options, such as giraffes that chew and suck on bones and horns from dead animals. Like your vitamin powders, these horns aren’t replacing other parts of the giraffes’ diets, and they’re certainly not hunting down animals just to lick a femur. But under certain circumstances, gently chewing on a dead buffalo may be exactly what a giraffe needs to stay healthy and strong.

Having a bite of bone

Eating bones is called osteophagy, although that’s not entirely what giraffes are up to when they snack on skeletons. Instead of chewing, chomping and swallowing bits of bone, giraffes will generally suck on pieces of bone like a kid with an Everlasting Gobstopper. The giraffe’s teeth are specialized to chew rumen and leaves, not hard bone, but they can scrape bones to loosen material while their saliva softens it up. The overall goal is to acquire minerals like calcium and phosphorus, and the giraffe will generally spit out the remaining bone once it’s done.

Now, giraffes spend most of their time eating leaves of course, and sucking on bone is only done with nutrients may be scarce. Seasonal differences in plant life seems to be a factor, as does the size of the giraffe itself. The most likely scenario is that a large giraffe with a more resource-hungry body will be munching on bones in the dry season. This pattern isn’t unique to giraffes either, as other herbivores like cows get their calcium and phosphorus fix in a similar way.

Of course the most famous bone-chewers most of us know are dogs, but dogs aren’t actually osteophages. Dogs don’t really eat the bone, much less need them as a source of calcium like the herbivores mentioned above. They’re often interested in getting flecks of meat and marrow that may still be on a bone, rather than the bone itself. As such, raw-hide bones aren’t actually bone, which is good, because lots of animals that humans eat can have bones unsafe for a dog to chomp on. If a bone splinters, it can cause dangerous blockages in a dog’s intestines. So unless you can train them to lick and discard a bone like a giraffe, it’s safer if your dog leaves the real bones to the herbivores.