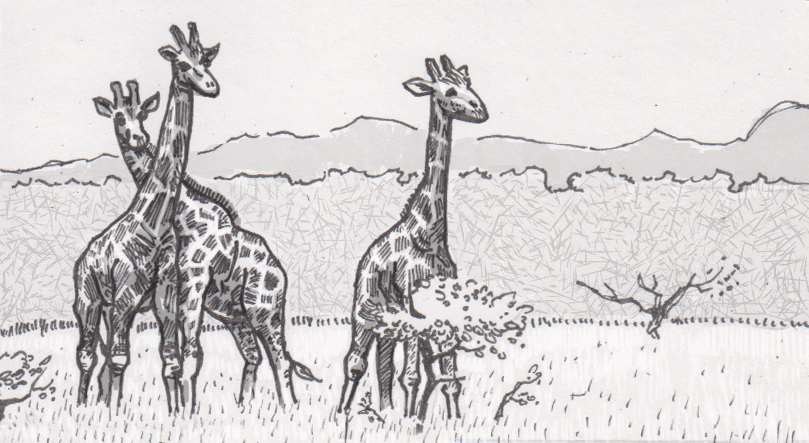 Today at the zoo, my kids pointed out that giraffes are weird. Even while standing next to a black-and-white striped horse and a giant bird that looks like dried hunk of foliage on stilts as driven by a pink snake, it was hard to argue that giraffes weren’t the oddball of the “savanna” exhibit. My daughter went on to demonstrate for her younger brother how giraffes need to spread their legs to reach the ground for a drink of water, which is admittedly a strange but somehow appropriate maneuver for such ungainly animals. Unfortunately, it seems that we have all been too focused on giraffes’ outward appearances, as researchers are just catching up on their unusual behavior patterns, some of which may prove to be important for these threatened animals’ survival.

Since giraffes are social herbivores that have to worry about things like lions eating their calves, it makes sense that we’d expect them to behave like other prey animals in their environment. Foremost among those patterns is the idea of safety in numbers, as moving in a large herd will increase the odds that at least on individual will spot a predator in time to warn their group, as well as decrease the odds that an individual will be successfully targeted by said predator. This idea is clearly demonstrated in herds of zebras, who not only run at the slightest warning from their neighbors, but also dazzle and confuse predators with their stripes. It’s an effective enough strategy that prey animals are more likely to live in groups if they face more predators in their ecosystem, although apparently nobody has told giraffes about this.

No interest in predators or parenting

Thanks to closer observations of actual giraffe behavior, researchers realized that the size of giraffe groups didn’t depend on nearby predators. They also ignored widely-accepted wisdom about shared parenting responsibilities- while many social animals want more familial caregivers for their offspring, giraffe mothers didn’t seem to want to live in bigger family groups when dealing with young offspring. Allowing for some influence from the local environment, giraffe mothers avoiding large groups turned out to be the biggest predictor of herd sizes, basically upending all the “rules” we expected giraffes to inherit from other prey species.

This research only looked at giraffes in eastern Africa, and now needs to be replicated in other parts of the continent. Coupled with the recent discovery of giraffe’s fragmented genetic populations, conservationists are realizing that we likely lack enough understanding of giraffes’ ecology to effectively protect them. With major declines in population seen in recent years, there’s a bit of a scramble to try and ensure these unusual creatures can carry on with their contrarian lifestyles long into the future.