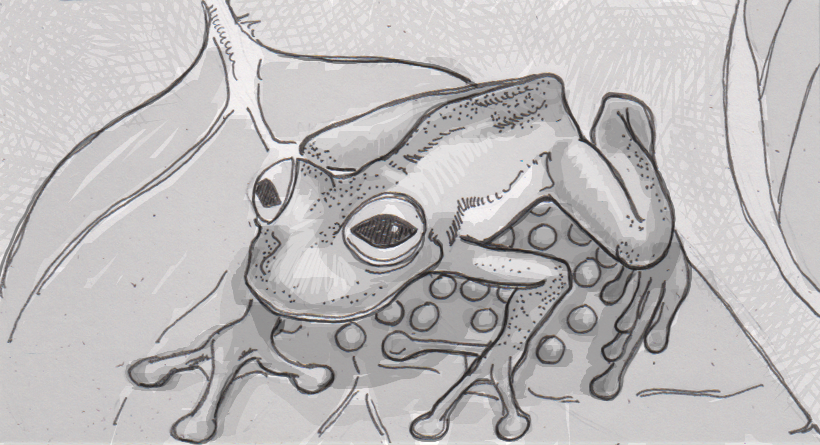 Glass frog moms increase their eggs’ odds of survival with one, wet embrace

Mammals have a pretty clear-cut sense of motherly care. Our main schtick is based around being fed by our mother’s milk as babies, with live birth and a bit of affection being recommended if available. Amphibians are much less predictable, as their eggs are generally fertilized after they’re laid, at which point mothers’ jobs are usually done, leaving father frogs to guard or carry eggs and young to viability. Several species of glass frogs have been found to break this mold though, with mother frogs helping their eggs get a safer start in the world by… sitting and… peeing on them.

Not just left on a leaf

Glass frogs lay a couple dozen of their eggs on (or sometimes under) leaves where they will hopefully be safe during incubation. They need to be hidden from possible predators or parasites, but still close enough to a stream or other water for the tadpoles to find once they hatch. To help keep the eggs safe, male frogs will generally visit the eggs on a regular basis, even spending the night covering them with his body to try to keep flies, spiders or worse from gaining access.

Before the mother frogs sign off on all this, some have been found to stick around and apparently fortify the protective slime that helps stick the eggs to their leaves. Female frogs were observed holding their bodies over freshly fertilized eggs for up to a few hours, staying put for that first and last visit even when poked at by researchers’ fingers. After the female finally departed, it was noted that the volume of the egg mass had quadrupled in size, having been infused with new hydration. It was unclear if this new water was secreted though the female’s belly, which is known to at least absorb water, or if the mother frog peed on the eggs to help bulk them up.

Whatever the method, the mother frogs’ efforts made a difference. The protective slime is unappealing to predators like katydids, and the hydrated eggs had a thicker layer of protection than eggs that never knew a mother’s love. The wetter eggs, which were often rehydrated later by the male frogs, had as much as an 80 percent boost to their survival rates. This was true among 10 genera that participated this maternal behavior, and scientists suspect it has been with these particular frogs for a long time, probably starting with a shared, and very attentive, ancestor.

Source: For glass frogs, moms matter after all by Susan Milius, Science News