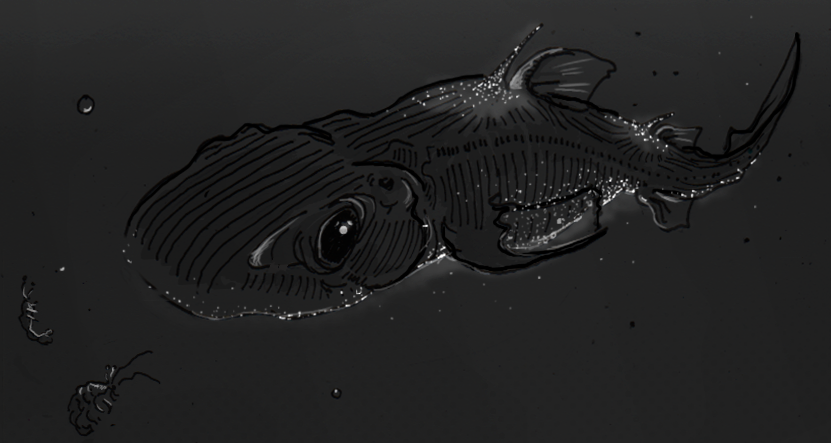 A great white shark earned at part of its name from its camouflage. To an observer below the shark, looking up, its white belly will blend in with the sunlit waters above, making it harder to identify the predator before it’s too late. Lots of marine life uses this trick, even those that live so deep in the ocean that the water is nearly black at all times. Just enough light can filter down to reveal the silhouette of a nearby fish, possibly ruining its hunt (or making it prey itself). Without sufficient ambient light to bounce off a white belly, more extreme camouflage is needed. In the case of a lanternshark, that means generating your own light with a bioluminescent belly.

Lanternsharks and their deep-sea neighbors, kitefin sharks, are smallish fish that feed on fish, squid and small crustaceans. The glow thanks to specialized organs that dot their bodies called photophores. The exact chemistry taking place in these organs is unknown, but the pressures that shaped this adaptation are coming into view. The more we’ve learned about how these sharks use their glowing bellies, the more variety we’ve discovered.

Spines worth showing off

The velvet belly lanternshark (Etmopterus spinax) has a very special cluster of photophores nowhere near its stomach. Instead, they’re packed around a couple of spines on the shark’s back. In the dark ocean, the shark’s shape is distorted and downplayed compared to the brightly glowing spines, estimated to be visible from up to 12 feet away. Researchers guess that the glowing spikes are intended to distract and possibly warn predators away, like a luminescent version of a monarch butterfly or poison dart frog’s coloration.

The last use of photophores is the most mysterious, but possibly the most sophisticated. Lanternsharks in the genus Etmopterus have photophores on their sides, which means they’re not using them for camouflage. Each species has slightly different patterning along their flanks which flutter and appear to flash as the sharks move. Researchers guessed that this may be a way for the sharks to identify and communicate with each other, but properly testing that in the depths of the ocean is understandably difficult. As a bit of a workaround, they looked for possible effects of such identification, which meant increased speciation.

If the sharks were expressing species-specific patterning, they’d have an easier time segregating themselves genetically. Differences would become pronounced more quickly as each group was able to breed without the averaging affects of genes from a wider population. This was backed up as Etmopterus has been found to diversify into new species at a faster rate than belly-only lanternsharks. With all this bioluminescent innovation, a great white shark’s stomach suddenly seems so plain.

Source: Why Do Glowing Sharks Glow? by Ed Yong, Not Exactly Rocket Science