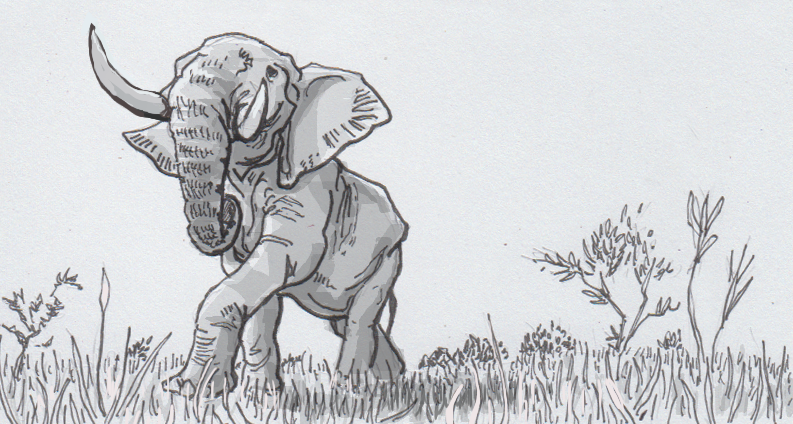 The gravity and concerns over the way an elephant walks

Elephants are famous for their trunks, marveled at for their brains, and killed for their tusks. These exotic bits of anatomy are very deserving of the attention, but some researchers are looking closer at some more pedestrian body parts as well, namely elephants’ feet. They’re not much to look at, but the feet that carry up to 13,000 pounds around the African savanna are surely worthy of some respect, and possibly even concern. Two studies have been looking into just how specialized elephant feet are, and how they best function in their environment.

The first study looked at how elephants carry their weight. Five African bush elephants (Loxodonta africana) were trained to walk across pressure-sensitive platforms, which could then measure how the huge animals’ weight was distributed with each step. They found that elephants effectively walk on their toes, putting most of the pressure from each step on the outside of their front feet, and very little weight on their heels. When walking on hard surfaces, like concrete slabs often found in enclosures for captive elephants, this likely leads to foot problems over time. It appears that an elephant’s feet expect a softer surface to dig into with each step, since that weight is so focused in front.

Digging in the dirt

The evolution of an elephant’s gait is actually so significant that makes a difference to animals other than the elephant. Researchers in Uganda have been studying elephant footprints, which often sink into the softer mud and soil in elephants’ native stomping grounds (sorry!). These footprints are often deep enough to form tiny microhabitats, filling with enough water to house mosquito eggs, frog tadpoles, or up to 61 other small invertebrate species. Older footprints that filled with decomposing foliage were found to house the most biodiversity, while medium-aged prints had less.

Taken together, these studies show how megafauna like an elephant are very closely aligned to their natural habitats. Removing them may injure their bodies, plus leave a gap in their ecosystems that are nearly impossible to replace. Just like large animals help distribute seeds of the plants they eat, it seems that they literally help shape the lives of animals around them with each step they take.