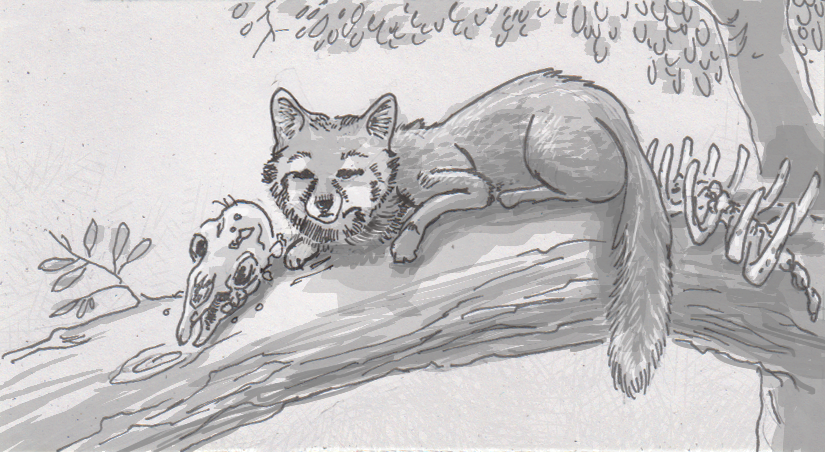 “If you ever see a gray fox, it’s not doing it’s job very well.”

Presumably, Tuscon, the gray fox wearing a leash as part of a presentation by Bay Area Wild my kids saw today, could be excused for his visibility. The 14-year-old fox had spent most of his life with an animal rescue operation, and thus had little opportunities to practice hiding from either prey or predators. He had, according to his handlers, retained at least one strong instinct from the wild, which was a taste for bird eggs. Apparently one of the reasons we don’t see gray foxes is that most of us never look for them in trees.

In contrast to their taller, larger cousins that dominate the eastern United States, gray foxes (Urocyon cinereoargenteus) have a number of adaptations that enable them to climb even fully-vertical tree trunks. Their shorter limbs and powerful hind legs let them jump onto the base of trees, at which point they can grip the bark with semi-retractable, hooked claws that barely resemble those of other canines. Gray fox wrists are also unusually flexible for a canine, and have been compared to the anatomy of an arboreal primate. All this adds up to an animal that can not only climb, but do so fast enough to chase speedy prey like squirrels right up a tree.

Chasing squirrels probably wasn’t the driving factor in gray fox evolution though. As Tuscon’s story indicated, it’s much easier to ‘catch’ slower things in trees, like eggs and baby birds. It’s also a great place for the fox itself to stay safe, and they’ve been known to make dens in hollow trees as high as 20 feet off the ground. During their first few weeks of penthouse living, a mother and kits will be fed by the father fox, possibly putting off their first steps in actual soil for weeks. This isn’t a given, as gray foxes will also dig out or repurpose subterranean dens, but trees seem to hold a special allure that the dirt can’t compete with.

Maybe this is why some gray fox couples decorate their trees with skeletons. It’s not a requirement for tree-dwelling foxes, but some mating pairs have been known to drag fawn carcasses into trees, leaving them to decompose into rather macabre adornments. The foxes will sometimes use the bones as seating, but it’s thought that the primary attraction is the smell. Multiple trees in a mating pair’s territory may be marked with bones as a way to indicate the boundaries of their turf. The visual impact of a suspended deer skeleton probably helps distract from the small foxes sitting there as well.