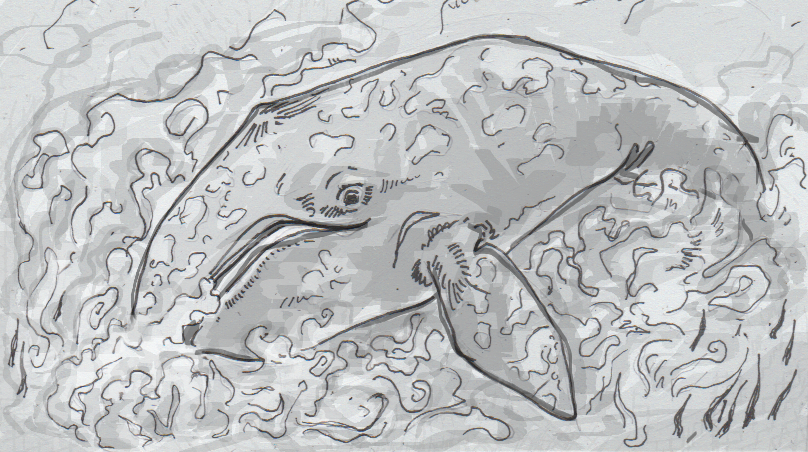 As the only member of their species, genus and family, gray whales (Eschrichtius robustus) are an odd offshoot in the whale family tree. They can grow up to 49 feet long, weighing up to 44 tons, with females generally being larger than males, partially thanks to the extreme demands that reproduction puts on them. The warmer, shallower lagoons they pick for birthing their calves aren’t great for their food supplies, which coupled with the need to nurse their 15-foot newborns, leaves them with a bit of a calorie deficit for part of the year.

To make up for the warm but lean mating season, gray whales usually migrate five to seven thousand miles to reach northern coasts for the summer. It’s a slow process, as the whales usually move around five miles-per-hour, but it’s worth it once the whales reach their preferred buffets near Alaska and Kamchatka. There they dine on small crustaceans, like Ampelisca macrocephala, a shrimp-looking creature no more than 15mm in size, which is fine, as long as the whale can get enough of them.

Meals in the muck

This is where the gray whale’s dining habits start to divert from other filter feeders. Rather than gulp a mouthful of krill floating in the water column, gray whales are digging heaps of A. macrocephala out of the dirt. The whale will swim to the ocean floor, tilt to one side, and suction up food and  sediment into their mouths. Rather than just filter out unwanted water and tiny, floating debris, they have to eject plumes of dirt with their two-ton tongue. Over the five to seven decades of a whale’s life, this repeated scraping along the sea’s floor takes its toll, marking their skin and even causing blindness in their preferred eye, most often their right.

As unpleasant as a grit-filled meal sounds, it’s likely not the whale’s biggest concern. Orca are known to target gray whales, and humans have basically wiped out any populations in the Atlantic (although some sightings have raised hope of their return.) Assuming my three-year-old doesn’t start mashing his face against the table to suck up food, I guess I have some things to be grateful for at dinner time.

My first grader asked: Why don’t they have a way to avoid going blind?

While many creatures have evolved amazingly sophisticated defenses and immunities, such dynamics only evolve if there’s a reproductive benefit to doing so. Since being partially blinded in old age doesn’t seem to reduce a whale’s chance to reproduce, there’s no multi-generational advantage to protecting their peepers.