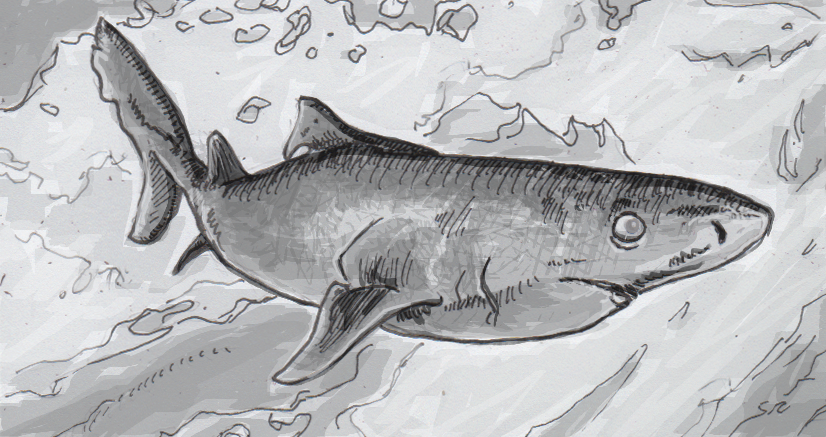 If living fast leads to dying young, then is living slow the secret to a long life? Giant tortoises seem to be the exemplars of this concept, moving sluggishly through life for anywhere between 130 to possibly 250 years. Or is the secret to a long life being big, since we’ve found 130-year-old bowhead whales, but few mice living past four (with one bizarre exception of a mouse dying at 14!) These ideas have been the subject of research and speculation for over 100 years, focusing on metabolism, daily energy expenditures, or body size and more. Now scientists have a new model to look at, although this ancient critter combines many of these theories of longevity all at once.

Greenland sharks (Somniosus microcephalus) are often referred to as “sleeper sharks,” because that appears to be the extent of their activity most of the time. Even when active, they nearly drift through the ocean a under one-mile-an-hour, less than half of what most humans can pull off in the pool. The sharks seem to be scavengers or possibly ambush hunters, as there aren’t any real observations of them actually pursuing the bits of fish, moose, seals or polar bears that have been found in their digestive tracts. Slow and steady may win the race though, as even without any flashy, dramatic pursuit of their prey, Greenland sharks are eating enough to grow close to 23 feet long, eventually.

Between their low profile and the frigid waters they live in, Greenland sharks haven’t been thoroughly investigated. However, their slow growth rate of only half a centimeter a year was the first clue that they were growing for a very long time. The usual trick of counting rings on the sharks’ vertebrae to determine their age isn’t possible, as their growth doesn’t leave the distinct rings you find in the backs of other sharks. Fortunately, this wasn’t the only way to figure out how long a Greenland shark might be lurking in the ocean.

Sharks accidentally killed in encounters with fishing vessels were acquired so that their eyeballs could be examined. It was determined that radioactive carbon-14 built up at a regular rate in their lenses, and that comparing that to known fluctuations or spikes in carbon-14 in the world at large, such as from nuclear testing in the 1950s and 1960s, might reveal individual sharks’ ages. Samples of 28 animals found that Greenland sharks may be living between 272 to 512 years, but making it to 390 is most likely.

Living longer without a backbone

These staggering numbers raise a lot of questions, many of which tied to the earlier hypothesis concerning longevity. Are Greenland sharks living this long because of their low activity rate, their large size or the cold water they inhabit, like a giant, albeit mild, cryogenic tank? Whatever the mechanisms, the even the more modest possibility of 272 years is plenty more than other vertebrates, although not the overall world record. Ming the ocean quahog clam was found off the coast of Iceland in 2006, and was determined to have been 507 years old. While this may seem like another count towards living in cold, northern water as the secret to a long life, many plants beg to differ. Even ignoring clonal and fungal colonies, a Great Basin bristlecone pine (Pinus longaeva) has been soaking up the Californian sun for over 5066 years.

My second grader asked: How old can people live? Are we big or small? And sloths are slow— how long do they live?

Assuming size is a component to longevity, humans seem to be on the “big” side of the spectrum. The oldest documented human lived to be 122 years old, although a one Mbah Gotho may turn out to be the new(?) record-holder at 145, if his birth date can be confirmed.

While weighing under ten pounds, and living in warm places, slow-moving sloths seem to live for 20 to 30 years in the wild, adding another point to the “live slow” line of thinking.

Source: The Sharks That Live to 400 by Ed Yong, The Atlantic